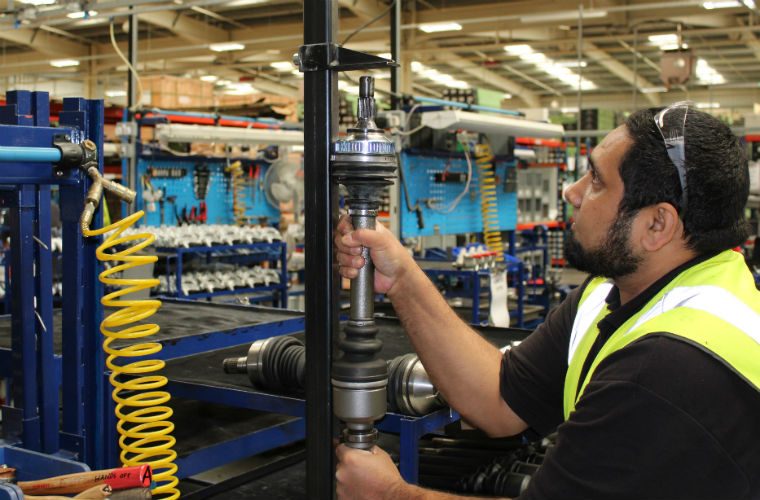 Supplying remanufactured components for more than 20 years and new parts for the past ten, GW heads to Shaftec to find out how it has established itself as one of the UK’s leading suppliers of aftermarket transmission, steering and braking parts.

With one eye firmly on the future, Shaftec continues to invest heavily in the facility.

This has driven developments such as new diagnostic apparatus which completes a ‘real life simulation’.

As part of a multi-million pound expansion programme, three years ago, Shafec consolidated its UK business under one roof – relocating to a Midlands-based 42,000sq ft premises – which for the first time incorporated its remanufacturing and testing facilities, together with its warehouse on one site.

An all-makes range of remanufactured and new parts, including driveshafts, CV boots, steering racks and pumps, and brake calipers are available from stock.

Shaftec director, Tom Curtis said: “We really know our business, market and products and I think it shows.

“We have probably established the widest range of CV joints available in Europe, which is why we have in excess of 500 stockists around the UK.

“For orders received and despatched on the same day, our availability runs constantly at around 98 per cent or above.”

The remanufactured driveshafts are stripped back, inspected and refurbished to their original state with brand new CV joints, boots, grease and clips.

The steering range, which was launched in 2009, consists of 1,200 rack numbers and 1,500 pump numbers, covering manual, hydraulic and electric applications.

Shaftec branded steering racks are then refurbished to the original state and reassembled by hand using brand new components.

Brake calipers were added to the portfolio in 2007 and now account for 5,500 part numbers.

Each caliper is reassembled with new pistons, springs, actuation and seals.

For less common parts, Shaftec offers a ‘recon and return’ service whereby the old core part is collected, remanufactured and returned within three to five days.

The future for remanufacturing

“There is no doubt about the future of remanufacturing.

“It is here to stay and our aim is to continually invest in all areas of the business to ensure we not only remain the UK’s leading brand of remanufactured components but expand further into new territories Europe and Worldwide.

“With over 30 years of remanufacturing knowledge and the support team we have at Shaftec, we have everything to offer our distributors that will enable them to grow their sales and business alongside us.”

For further information about Shaftec, click ‘more details’ below.

0 0
Previous ArticleGDPR: Garages could be fined up to four per cent of turnover for non-complianceNext ArticleDayco empowers technicians with training for confident installation