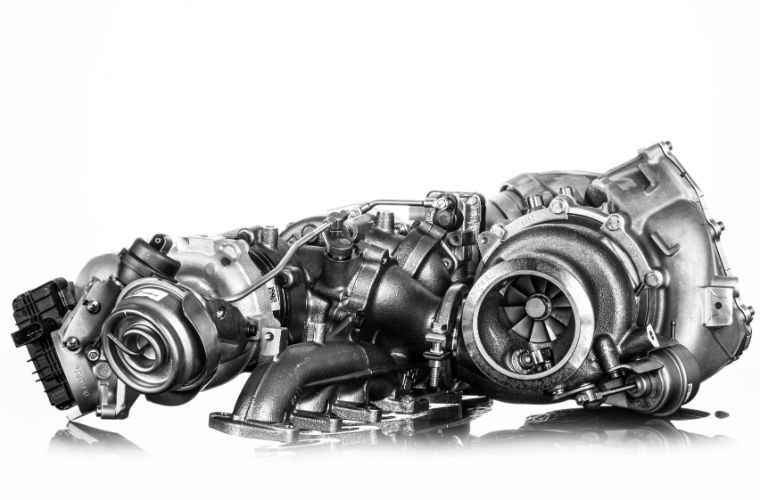 One of the routes to greater efficiency is to combine two, three or even four turbos, which use low pressure and high pressure forced induction to precisely match engine speeds and loads.

These units were previously only found on performance cars but are now being used on standard road cars.

The exhaust gases are enriched with fresh air, feeding the LP turbo’s compressor.

As engine speeds increase further, a bypass valve cuts the supply to the smaller HP turbo and the larger LP turbo takes over.

Although some exhaust gases keep the small turbo spinning, the large turbo now provides all the charged air pressure.

In this triple turbo, the individual units come into play sequentially.

The benefits of the extra turbo are dramatic.

When fitted to the same 3.0 litre diesel engine, the R3S triple turbo produces 25 per cent more performance and eight per cent lower fuel consumption compared to the R2S two-stage turbo.

Based on the same principle as the R2S, it has two HP turbos plus two smaller LP turbos.

As engine speeds increase, the LP turbos come on stream, both smaller units working together.

At higher speeds, the final HP turbo is introduced, for maximum output.

This approach produces an even faster response from the turbos, providing extra power and smooth torque curve without increasing the system’s weight.

These are complex systems, but with their technology means more becomes less.

Impressive gains in efficiency are balanced with lower emissions, helping to keep diesel engines competitive at a time when many purchasers are moving away to petrol, hybrid or electric power.

The complicated nature of these turbos, particularly the precise operation of their VTG, wastegate and bypass valves, mean they require specialist knowledge from turbocharger experts.

For further information about BTN Turbo select ‘more details’ below.