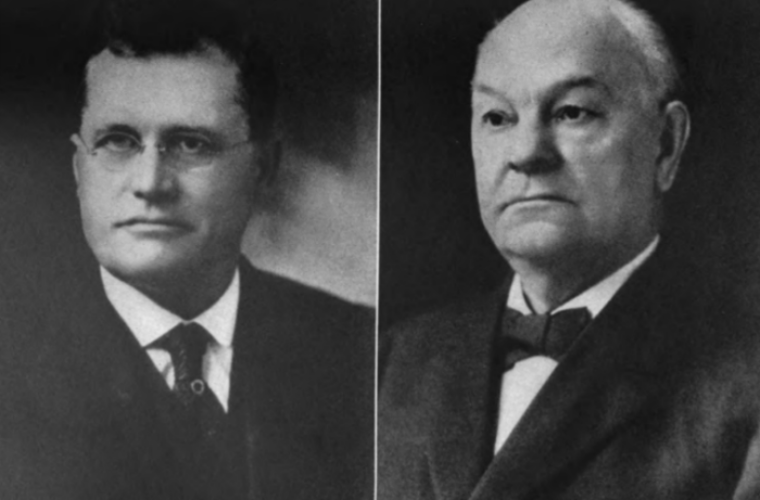 In 1903, iconic brands such as the Ford Motor Company, Harley Davidson and Atletico Madrid were established and Borg & Beck was founded.

In Moline, Illinois, Charles Borg, a mechanical genius, and Marshall Beck, an inventor, joined forces to set up the Borg & Beck Company.

Originally, the company was formed to develop, amongst other things, automatic machines for making wagon poles for carts, which at the time was a 15-part manual process.

In that decade, the rise of motor vehicle began, and in the Spring of 1909, an engineer from a car maker named Velie asked Charles’ son, George, whether he could step in and cut a male thread on the inner casting of the clutch cover, to solve the problems they were having with their existing supplier.

Foreseeing a great opportunity to be part of the growing car industry, he suggested they send them the castings.

As they were of about 14-inch diameter and needed 32 threads per inch, the job certainly wasn’t an easy task, but within a couple of hours, the clutch covers were complete, and the threads were perfect. As a result, they won more orders.

The chief machinist, Gus Nelson, was happy to help out with the samples but refused to spend every day at a lathe to complete the rest of the orders.

The work was completed by the company’s other machinists, whose skills were no match for Gus’s, which resulted in the work taking longer than anticipated to complete.

Realising that the company’s average machinist wasn’t good enough to cut the threads in the covers, George was inspired to design a new solution to the existing clutch.

Having identified that the main problems were the rapid wear of the facings, uneven grab and slip, which is when they then burn out, George, Marshall and Gus worked day and night on their alternative clutch system.

From paper designs came wooden patterns, then castings and, finally, a completed sample, incorporating a metal ‘fork’ lever that worked with a spring, which pushed the facings together, compressing a disc, to spin a shaft. These three men, who had never ridden in a car, let alone driven one, had invented the first practical sliding clutch for a motor vehicle.

As this was obviously just a prototype and had to be further developed and tested, George bought a second-hand car and after dismantling the existing clutch, Gus machined some connections and installed the new clutch. After consulting the manual to see how to start it, he pushed down the clutch pedal, put the car into gear and as the car took off, he crashed into a brick wall! Although winded, Gus was unhurt, but as history testifies, the clutch worked.

Borg & Beck then went into full scale clutch manufacturing, with the first purchaser being the Thomas B Jeffery Company of Kenosha, Wisconsin, who needed a solution for the Jeffery Quad, a four-wheel drive truck used by the military. On the verge of losing the contract to supply military vehicles due to significant clutch problems, the Borg & Beck clutch was to be their saviour, replacing the unreliable cone clutch set-up. The new Borg & Beck clutch proved itself on all terrains, lasting in excess of two years, which in those days was totally unheard of. Their 40 orders a day, steadily increased up to 100 and the company then went on to fit Borg & Beck to its other vehicles.

In 1931, the Borg & Beck Company Limited was set up by Automotive Products in the UK to manufacture clutches under American patents from Borg & Beck in the USA. This allowed the company to sell British made Borg & Beck clutches in Great Britain, British Overseas Territories and the British Empire (except Canada).

The company became the UK’s leading manufacturer and supplier of clutches, manufacturing more than four million clutches-a-year during the ‘70s. At that time, in excess of 85% of British made vehicles were manufactured with a Borg & Beck clutch, many of which are still kept on the roads today by classic enthusiasts.

The Borg & Beck brand was purchased by First Line Ltd in 2006, who has since invested heavily in new product development, whilst preserving the heritage. Today, Borg & Beck is proud to offer an extensive range of over 37,000 references, across 60-plus product lines, including a range of Classic Clutch Kits catering for over 250 classic applications, enabling enthusiasts to install the brand the vehicle was originally fitted with, therefore maintaining its integrity.

Borg & Beck’s product portfolio is now one of the most comprehensive in the aftermarket, all of which are backed-up with a comprehensive two-year warranty against manufacturing defects.

For more information about the history of Borg & Beck and their extensive product offering for car and truck call 01869 248 484 or visit: www.borgandbeck.com