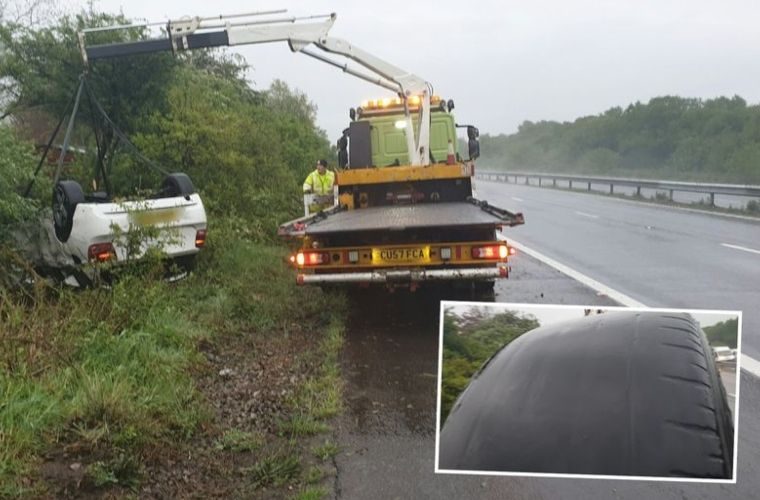 Police have issued a warning to motorists about making sure cars remain roadworthy after a crash on the M4 near Pontarddulais in wet conditions.

South Wales Police’s roads unit shared pictures of the car’s dangerously worn and illegal tyre, alongside images of the vehicle being moved from the side of the road.

Officers said the driver of the car that ended up on its roof on the side of the motorway was “lucky to get away without injury”.

They said: “If there’s ever an example of dangerous tyres, it’s here.”

It follows the DVSA’s recent six-month MOT extension which has been rolled out to help prevent the spread of coronavirus.

Both the Independent Automotive Aftermarket Federation and the Independent Garage Association, among others, have warned that the majority of consumers do not realise that they are expected to ensure their car is roadworthy.

The law requires car tyres to have a minimum tread depth of 1.6mm in a continuous band around the central three-quarters of the tyre.

The tread must meet this minimum requirement across its complete circumference.

The RAC said: “Checking your legal tyre tread depth is one of the most important checks you can make on your car.

“Having worn tyres means the only contact patch between you and the road is past its best.

“You could almost call it an accident waiting to happen.”