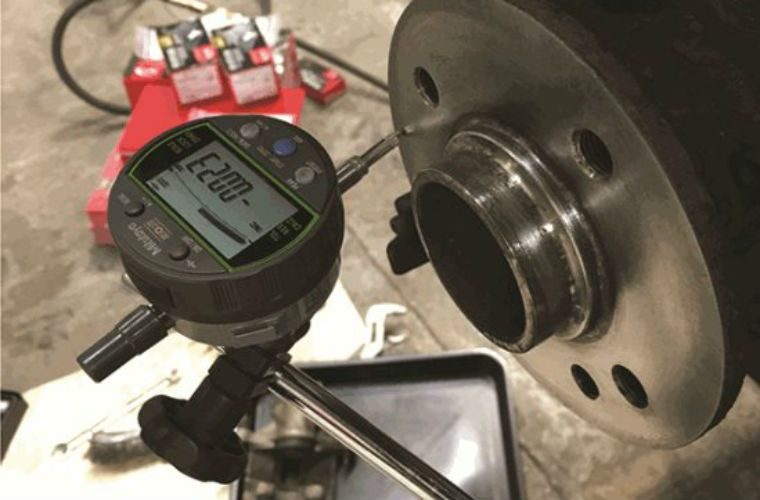 Apec Braking has released details of a recent case in which one of its braking experts were called on to help a workshop solve a recurring ‘brake judder’ problem.

Originally the vehicle was booked in for new discs and pads.

These were changed by the garage and, following a test drive, the vehicle was returned to the customer.

However, a few weeks later the vehicle returned to the workshop with complaints of brake judder.

The garage assumed that the discs had warped, replaced them and handed the car back once again following a test drive.

The issue persisted another four times before the the garage called the Apec technical hotline to raise concerns.

An Apec spokesperson said: “Due to modern manufacturing processes and the materials used, a warped brake discs are a rare occurrence these days.

“Despite this, Apec takes every complaint seriously and an appointment was made by a member of the Apec TechMate team with the garage in order to find the root cause of the problem.

“Techmate will always follow a process of eliminating external issues to ensure that the issue is resolved and diagnose by using precision measuring tools to ensure resolution of the issue.”

Initially the vehicle was test driven to confirm the symptoms before the tyres, wheel bearings suspension bushes were all checked for damage or excessive wear.

Confident that the condition of all the components checked had not adversely affected the vehicle, the braking system was stripped for inspection.

To confirm the condition of the brake discs, Techmate measured the thickness of both brake discs using at least eight different points around the disc.

After measuring Techmate confirmed that the nearside front brake disc was suffering from excessive disc thickness variation as there was a variance of 0.05mm between the thickest and thinnest part of the brake disc.

The spokesperson explained: “This variance will result in the symptom of ‘brake judder’ caused by the brake pads pulsating over the uneven surface.

“All Apec brake discs are tested before leaving the factory and will have a DTV reading <0.013mm.”

The next step was to examine the braking system for any causes of uneven material transfer as this is the most common cause of DTV.

The garage had followed best practices by ensuring the hub was thoroughly cleaned, the pads were lubricated with a non-metallic high melting point grease to facilitate movement, the sliders were sufficiently lubricated with a silicon-based grease and were moving freely and the caliper pistons retracted smoothly when pushed back and the brake fluid from the caliper did not have signs of contamination that might restrict movement of the pistons.

The maximum amount of tolerance for brake disc runout is >0.08mm.

The runout reading from the nearside front 0.2mm which indicates that the brake disc has excessive lateral runout.

To resolve this issue, Techmate needed to determine the cause of the runout.

“It is very common that the lateral runout is usually caused by the corrosion build up on the hub face, however the garage had been very meticulous and ensured that the hub surface was free of corrosion before fitting the new brake discs,” the spokesperson added.

To ensure that the hub was not causing the issue, a run out measurement of the hub was taken.

The maximum amount of tolerance for the hub runout is >0.04mm.

The nearside hub gave a runout measurement of 0.08mm.

“As this underlying issue with the hub was not detected at the point of fitting the new set of discs and pads, the issue had never been resolved therefore causing the brake judder to always return after a few thousand driven miles.”

The nearside front hub was replaced, solving the cause of the problem.

The garage has since adopted a policy in which it now measures the run out of brake discs using a DTI gauge with every replacement.

For further information about Apec, select ‘more details’ below.