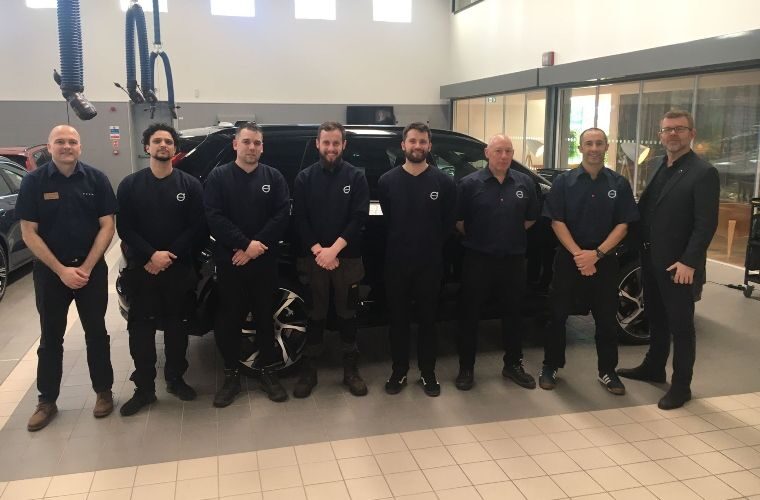 Volvo Car UK has doubled the number of contractors within its Temporary Technician Programme (TTP) with Autotech Recruit due to the ongoing success of the initiative – which has helped the vehicle manufacturer cover over 30,000 hours across its UK sites since its launch in 2018.

TTP was created to enable Volvo to tap into Autotech Recruit’s network of over 450 skilled temporary vehicle technicians and bridge workforce gaps, helping Volvo’s network of over 100 dealership sites in the UK maintain the right level of resource and capacity.

Geographically spread across the country to maximise coverage across Volvo sites, the eight contractors were bookable through a dedicated portal created by Autotech Recruit and paid a fixed hourly rate.

Since 2018, these eight original contractors under TTP have filled over 755 weeks for Volvo, helping to cover absences and recruitment gaps, and the initiative has been utilised by over 70 per cent of the Volvo network.

Now, to meet rising demand, Autotech Recruit has doubled the number of temporary technicians under the programme, with a further eight contractors undertaking Volvo’s silver-standard training in March this year and placed within Volvo sites.

David Wilson, who joined Autotech Recruit as a temporary vehicle technician in May 2021, entered into the Volvo Temporary Technician Programme in March, and explains the process: “Prior to joining Autotech Recruit, I was employed within an independent garage.

“We would see cars which were at least three years old at the end of their warranty period, so I felt on the back foot when becoming a temporary technician because vehicle technology had radically evolved.

“Since joining Autotech Recruit, I have received more training in 12 months than I did in almost a decade.

“So, when the opportunity to train with Volvo arose, I took it. Not only does this enable me to learn new skills and be trained to manufacturer standard, but it also increases my earning potential.

“Through Autotech Recruit, I undertook 30 hours of online training and three days at Volvo’s training facility in Daventry.

“On completion, I was placed within the Volvo dealership in Hinckley, and I haven’t looked back.

“We have the right software to hand, which enables us to work on the specific Volvo components that we have been trained to work on.

“The team at Hinckley are also very welcoming.

“Your contribution as a temporary technician, helping them ease the burden of demand, is clearly appreciated.”

Phil Murton, aftersales programmes manager for Volvo Car UK said: “Volvo Car UK is delighted that the Volvo Temporary Technician Programme, working with Autotech Recruit, continues to support its customers and retailers in times of need, and the latest addition of Volvo-trained and certified technicians not only strengthens the programme, but demonstrates VCUK’s commitment to constantly adapting.”

On the back of the success of the original alliance with Volvo in 2018, Autotech Recruit swiftly launched its Manufacturer Led Recruitment Programme (MLP), which was based on the Temporary Technician Programme.

Since its launch, MLP has filled over 112,000 hours for vehicle manufactures including BMW, Toyota, and Ford to name just a few, accruing over £20 million in labour and OEM part sales in the process.

“Dealership workshops are no different from independent garages in this respect – they still need to recruit vehicle technicians to ensure they are running at optimum capacity.

“However, they do need technicians with the brand-specific skill set, which is why we created TTP and the MLP.

“We are delighted with the ongoing success of the programmes, which is demonstrative of the demand for additional resources.

“We continue to invest heavily in our contractors to ensure they are trained to the highest level so we can provide the best solution to our clients.

“This not only ensures the industry can meet growing demand efficiently, but it also safeguards the career of vehicle technicians.”