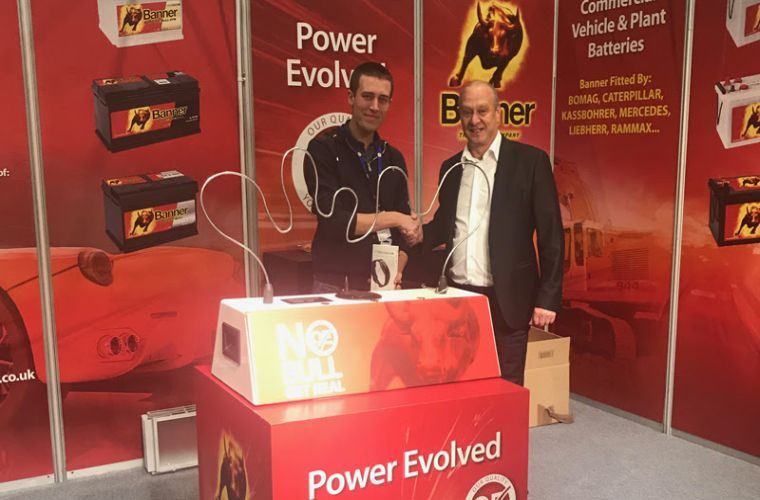 The 'beat the Banner buzzer' competition took place on the Banner stand.

Banner Batteries is hailing its attendance at this year’s Alliance Automotive Group’s UK trade show and conference in Liverpool a huge success.

Winner on day one of the show was Chris Thomas, owner of B & R Factors of Ammanford.

Having made a pit stop at the Banner stand, Chris showed real nerves of steel and headed back to South Wales with a latest Fitbit.

Also demonstrating a steady hand the following day was Rob Iveson, proprietor of Rob Iveson Main Street Garage in Shap, who completed the challenge in an impressive 12 seconds.

According to Banner, both have gifted their Fitbits to wives Hannah and Jackie.

Commenting on his success, Chris said: “Beat the buzzer was a novel promotion and it was pleasing to complete the challenge in a fast time – well at least my wife Hannah thinks so.

“We enjoy a very good working relationship with Banner Batteries, and their products are very well respected across our customer base.

“It will be interesting to see what type of on-stand promotion they conjure up for next year!”

Rob added: “It was a great show and a great Banner promotion.

“At the business end of things, I wanted to visit the Banner stand as their batteries today feature as original equipment on many new vehicles that are coming into the aftermarket.

“This, coupled with the fact that they are a high quality manufacturer, has seen us recommending them more frequently to our customers.”

Commenting on the show, Banner Batteries’ country manager, Lee Quinney said: “We appear to be gaining quite a reputation for our ability to deliver unique promotions year on year, and 2019 was no exception.

“A large percentage of stand visitors were eager to chance their hand, although it has to be said that the hand-to-eye coordination of some did leave a little bit to be desired.

“That said, Chris and Rob certainly left the show with a buzz.”

To find out more about Banner, follow the ‘more details’ link.