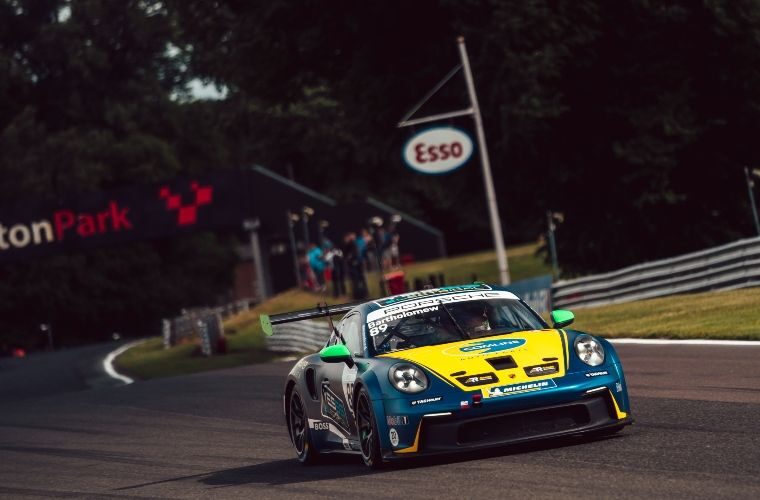 Comline Richardson Racing and title partner, Comline Auto Parts, have been victorious for the second successive weekend in the Porsche Carrera Cup GB following a dominant win by Will Martin in the opening race at Oulton Park.

Will was in a class of his own; starting from the front row, he took the lead from polesitter, Kiern Jewiss, before the race was temporarily halted to clear debris and damage from incidents behind him.

Upon the restart, he surged clear and took the chequered flag by more than five seconds – setting the fastest lap in the process and breaking the lap record too.

By contrast, Jack Bartholomew endured a tough first race; he sustained damage after starting 10th and was embroiled in the opening melee.

He managed to nurse the car home to finish 13th.

In race two, starting fifth, Will drove a solid race. Due to the narrow confines of the Oulton Park track, he was unable to find space and take advantage of the strong pace he had in the car to move through the field – he finished in the place he started.

Fortune didn’t favour Jack in race two either, as contact at the hairpin on lap 12 dropped him down from 12th to 16th place, which is where he finished.

Leaving Oulton Park, Comline Richardson Racing leads the entrants’ championship, while, in the drivers’ standings, Will is just three points off top spot and Jack is seventh.

Comline general manager for marketing and communications, Leigh Davies, said: “It was another terrific weekend for the Comline Richardson Racing team and the Comline brand.

“Will was in fantastic form; he showed searing pace all weekend and fully-deserved his victory.

“As for Jack, we know he’ll bounce back stronger.

Will Martin said: “It was a great weekend for me, Comline Richardson Racing and Comline. We had strong pace throughout and showed that we are right there in the championship fight.

“Race one went really well and to win for a second weekend in a row was great.

“The aim in race two was to score as many points as we could, as it’s so difficult to overtake round here, and that is what we did.

“Having had a tough start to the year at Donington Park, we’ve really come out fighting in the last two rounds and have closed right in in the points, and we have to maintain this form in the rounds to come.”