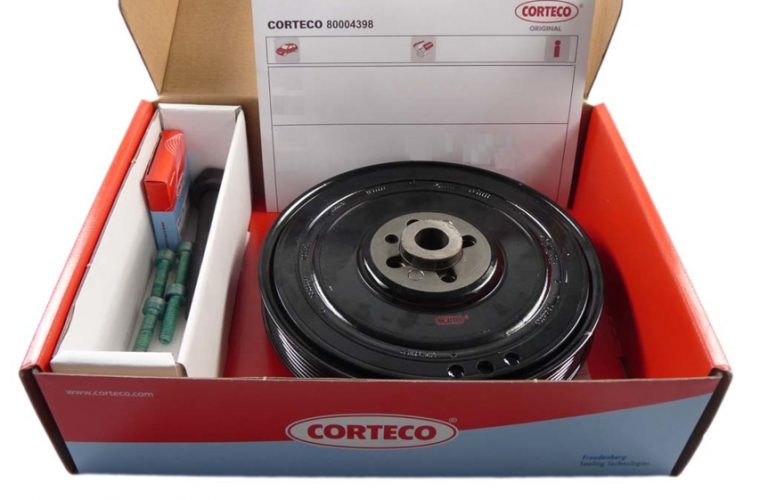 Corteco has identified the source of ‘ride and noise issues’ on some Ford Ka and Peugeot 207 models and has recommended some easy solutions.

On ageing Ford Ka models, the dampening medium is subject to wear and the top struts are likely to fail. Top struts perform several important roles, some of which are related to dampening noise and vibration control.

A key role of each top strut is to secure the suspension struts, or shock absorbers to the body shell. In doing so, they act as a conduit for the vibrations generated as the wheels travel over the bumpy and uneven road surface. Because the top strut design incorporates a vibration control dampening medium, this acts as a shield from these vibrations, so the driver experiences a much more comfortable ride.
Two top strut mounts (part numbers 21652920 and 80001667) are now available to cover a range of models and Corteco will supply top struts in singles rather than pairs.

Torsional Vibration Damper pulleys (TVDs) in some late Peugeot 207 models are beginning to generate noise and increase the wear on other accessories in front-end auxiliary drive systems.

TVD pulleys are increasingly fitted inside front-end auxiliary drives in order to reduce crankshaft vibrations. That makes them subject to wear.

An OE Quality TVD Pulley Kits (80004883), that includes both the pulley and all the appropriate stretch bolts, is now available to help resolve the 207 issue and to help eliminate potential installation errors caused either by failing to fit new TVD bolts (and reusing the existing bolts) or installing incorrect bolts.

“All TVD bolts are not the same,” says Corteco product manager Satbinder Rana. “Unchanged, a worn TVD creates problems for the belt and other components in the drive, but it’s essential that new TVD bolts are installed when the new pulleys are fitted in order to preserve system integrity,” he adds.

If garages re-use the old bolts, problems are likely. Corteco TVD kits include the correct bolts, ensuring that bolt identification errors are eliminated.