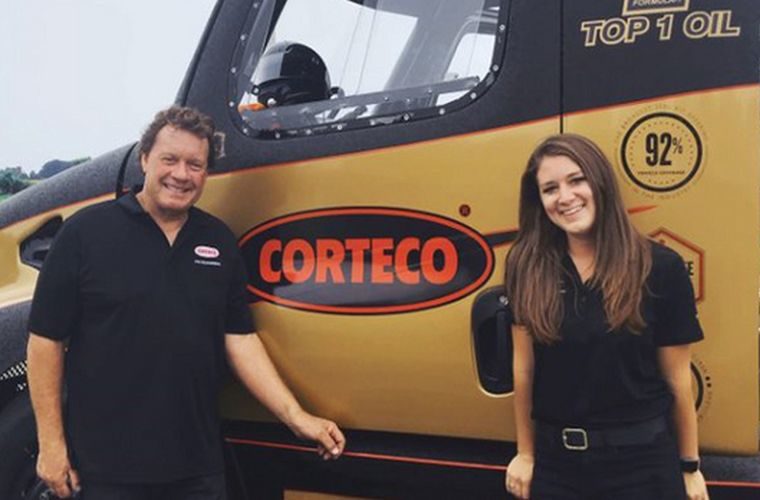 Mike Ryan, who has designed or performed stunt work for such movies as “Mad Max: Fury Road” and the “Fast & Furious” franchise – among scores of others – is also featured in a drifting video posted on the TransTec website.

For the uninitiated, drifting is a driving technique where the driver intentionally over steers, causing loss of traction in the rear wheels while maintaining control of the vehicle through the entirety of negotiating a turn. ​

The highlight of the video, emceed by members of the Hoonigan Racing Division, is Ryan performing maneuvers in a semi-truck emblazoned with the TransTec and Corteco brand product logos.

The primary intent of the partnership with Ryan is to create a “cool factor” around the TransTec and Corteco brands, said Chris Petronella, director of product development and category management for TransTec brand products.

He said: “We hope to get people excited about being associated with some well-known racing and stunt celebrities.

“Our end goal is to build the interest and awareness in an audience we don’t typically reach – an audience that uses our products and may not know they are using our products.

“The nature of aftermarket products is such that they often get lost in the system or vehicle once installed and end users don’t often realize they are using high-performance designs and materials from Freudenberg.”

The Corteco aftermarket division markets products under two brands – the TransTec brand and the Corteco brand.

Corteco-branded products include seals and gaskets, vibration control products and cabin air filters among other components.

TransTec-branded products, which include seals, sealing kits, and related engineered solutions, are marketed to professional steering and transmission rebuilders and remanufacturers.

There are typically several layers between TransTec-branded sealing kits and the end-use customer.​

In addition, the aftermarket division is using the stunt driving video campaign to build internal awareness of the Corteco and TransTec brands.

The Corteco Aftermarket Division has launched an initiative to offer more products to aftermarket customers, which will drive a need for greater collaboration between the company’s divisions.

The stunt driving truck video is ultimately the result of decade long relationship between Ryan and Petronella that began when Petronella answered a phone call as a product technician in Milan.

Ryan was seeking help with the ​steering system in a truck he was using to race up Pike’s Peak, a mountain rising 14,115 feet in the Colorado Rockies. Petronella shipped him several critical replacement parts.

Another video, expected to debut later this year, is a light-hearted re-enactment of Ryan’s introduction to Freudenberg.

The video will also include Aaron Kaufman, former star of the Discovery Channel’s “Fast ‘n’ Loud”.

“It’s a product testimonial that ties back to a fun video.”

To find out more about the Corteco product range, follow the ‘more details’ link.