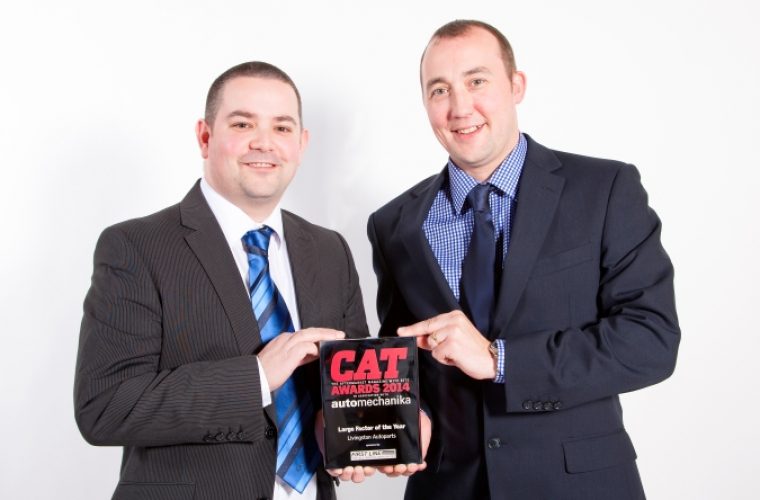 The awards were held in the imposing Twickenham stadium where two Scots, a Welshman and an Englishman all stepped up for awards in the home of English rugby in the middle of the Six Nations tournament.

Fittingly it was GROUPAUTO approved supplier First Line who had sponsored the ‘Large Motor Factor of the Year’, so it was left to sales director Terry Fisher to present Livingston’s Chris Burnside and Tony Purves with their trophy. Garej Wyn’s  Wyn Mathias accepted the ‘Large Garage of the Year’ trophy from editor Peter Lawton whilst Greg Lee, branch manager of CAT Automotive (Whitstable) received the ‘Extra Mile Award’ from BEN’s Nigel Rothband and JRP Distribution’s Olly Page.

Commenting on their success, Livingston’s sales director, Chris Burnside said: “We are both surprised and delighted to have been awarded this prestigious title.”

Wyn Mathias, the proprietor of Garej Wyn, was visibly moved and said: “I’m in a slight state of shock to be honest. Now seeing the trophy with our name on it, it’s amazing. I’m really pleased for the rest of the team busy working away back in Wales.”

Commenting of the awards, GROUPAUTO’s managing director Jim Mazza said: “We know how good the businesses that make up both our factor members and the independent garage membership are, but when their expertise, commitment and sheer professionalism is also recognised by the wider aftermarket community, we believe its also a vindication of the standards across the group as a whole.”