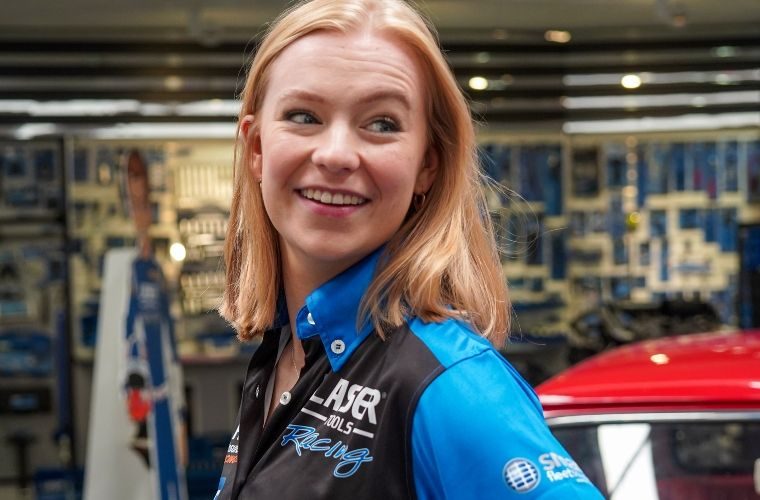 Laser Tools Racing has announced its support of Logan Hannah in the forthcoming Avon Tyres National Formula Ford Championship rounds at Oulton Park on the weekend of September 11/12, as a support series of the British GT Championship meet.

“We are delighted to be supporting Logan at the Oulton Park meeting,” said chairman of Laser Tools, Martin Smith.

“It is very much in the ethos of Laser Tools Racing to support and encourage grass roots motorsport and particularly young drivers.

“Logan Hannah is a perfect fit for us and we hope that this is the beginning of a long and successful partnership. We are very excited to be involved with Logan.”

After her karting apprenticeship in the prestigious Sodi World Series, Logan stepped up to single-seater racing in 2017 and became the first female driver to compete in the Formula 4 UAE series.

Over the past two years she has focussed on improving her skills utilising Formula 4 simulator training with Arden Racing and competing on-track in the Scottish Formula Ford 1600 series with Graham Brunton Racing.

At the last Scottish Awards ceremony at the end of the 2019 season Logan was not only awarded the Top Scottish Female Driver of the Year but also was highly commended for being one to watch for challenging for the championship in years to come.

In the shortened 2020 season Logan was on the podium in every Scottish Formula Ford race she competed in became the first female to win the prestigious David Leslie Trophy.

Logan said: “After not being able to race in 2021 due to multiple difficult circumstances, I am very ready to head to Oulton and compete in the national FF1600 championship in support of the British GTs.

“I’m really looking forward to everything that Laser Tools Racing and I can achieve together on and off track starting with this weekend at Oulton Park and beyond!”

For 2021, Logan is also in Year 1 of the MSA Team UK Futures programme — the Futures programme identifies, develops and supports talented competitors aged 15-24 who demonstrate exceptional potential to progress.

Watch out of Logan Hannah at Oulton Park on the weekend of September 11/12, at the Avon Tyres National Formula Ford Championship rounds, a support series of the British GT Championship.