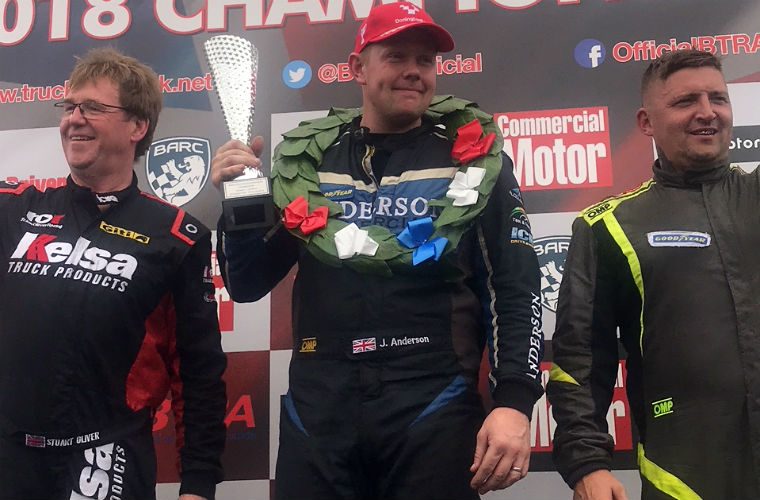 The race team will use advanced Millers Oils NANODRIVE engine lubricants in its racing truck.

“We’ve been using Millers Oils as a supplier for over 20 years and have always relied on their products, so it’s great to be able to enter into this partnership in a fiercely competitive arena,” says Jamie Anderson, race driver and company director, Anderson Commercials.

“We’re lying third in our inaugural BTRC season, going against teams who have competed for over 19 years, so any advantage we can get, we must utilise.

“Millers Oils NANODRIVE lubricants help reduce friction, increasing the power output of our racing truck to provide what could be a crucial competitive advantage.”

“Anderson Commercials has been a loyal partner for decades now and we’re delighted to be able to support them as they compete as Anderson Racing in their first BTRC season, and beyond,” says Kaz Driver, Millers Oils marketing manager.

“We have a long-established reputation in motorsport and our NANODRIVE technology is a product many teams find useful when aiming for optimal engine performance, especially at the cost of a simple oil change.”

Millers Oils award-winning NANODRIVE technology has been developed in-house at the company’s state-of-the-art research and development centre and is designed to reduce friction, and therefore heat, throughout the powertrain.

The low friction formulation is designed for demanding applications where power and efficiency must be combined with outstanding engine protection and durability.

“Recent dynamometer testing of a Ferrari 250 GT V12 engine demonstrated substantial peak power gains of 20 PS, up from 285 to 305, and a rise of 20 Nm torque, up from 275 to 295, equivalent to a 7 per cent increase, simply by switching to our NANODRIVE 10w60 NT+ oil,” explains Martyn Mann, Millers Oils technical director.

“The power gains achieved with NANODRIVE are a result of unlocking efficiency that is normally lost to friction and can provide a crucial competitive advantage in race series potentially making the difference between success and failure.”

Reliability and efficiency are key factors in any truck, either racing or fleet.

Commercial vehicles can be expected to travel at least three times’ further between oil changes than passenger cars, placing significantly increased demands on the lubricants, heightening the importance of choosing a reliable and effective oil.

“I remember seeing the name as a child and can now appreciate its reputation, heritage and high-quality products.

“Our team also owns a workshop where we use a range of Millers Oils products in our customers’ road vehicles, as they allow them to run smoothly and provide efficiency benefits such as a reduction in fuel consumption.

“If we demonstrate to our customers that we care about what goes into their vehicles then they’re happy with the level of service that’s provided, resulting in an enhanced reputation for good customer service.”

For further information about Millers Oils, click ‘more details’ below.