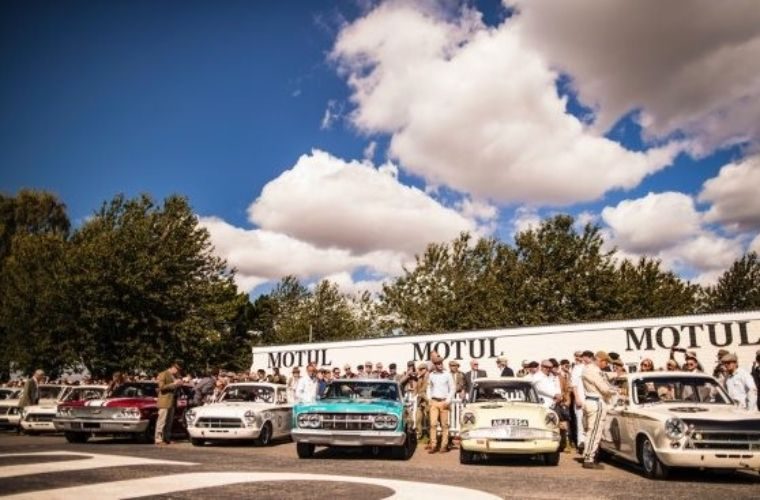 After an already busy summer, global lubricant force, Motul, turns its focus to the famous Goodwood Motor Circuit in Southern England and its renowned Revival meeting, for which Motul has signed a major multi-year partnership.

Over the course of more than thirty years, the Goodwood Revival has established itself as one of the most authentic and prestigious retro motoring events in the world, with visitors attending the event dressed smartly – most in period clothing – to create a unique atmosphere, whose spirit harks back to the era when Goodwood Motor Circuit was at its zenith between 1948 and 1966.

Motul, whose own history is more than a century and a half long, and whose appreciation of historic motoring is intensely keen, has already featured as the Lubricant Partner of the Revival.

This year, however, the company has committed to a deeper longer-term relationship with the Duke of Richmond’s Goodwood Estate for the Revival, which kicks off this coming weekend.

Motul’s presence at the Revival has resulted in a level of activity that marks a notable increase from previous years and Motul’s involvement with the whole Goodwood Estate including the Goodwood Road Racing Club, goes beyond the event itself.

Once again, Motul’s commercial activity at the Revival will centre around the Motul Garage on the Goodwood Revival High Street.

Here, not only will Motul technical staff be on hand to assist the public on lubricant technical matters, but visitors will also be able to purchase Motul product – including the latest of the specially commissioned limited-run Goodwood Motul Classic lubricant tins.

Also on display at the Motul Garage, will be historic cars from Motul’s OE Partners RUF and a Triton custom motorbike.

Motul will also have a selection of classic clothing, and Motul period cloth patches which have proved so popular in previous years, that this year Motul is providing a seamstress on site, who can professionally attach them to visitors’ clothing, while they wait!

The Circuit’s Infield will also feature a special Motul corner, where visitors can check out Motul’s much-loved Vagabond historic truck – while the nearby competitors assembly area will be Motul branded.

Motul’s mobile racing laboratory, housed inside a classic bus, will be at the Revival throughout, offering free oil sample analysis to all competitors, in order to help them diagnose any problems or potential issues with their engines.

Nearby will be a Motul open-air lounge area where competitors and team managers can relax undisturbed, in the lea of the Motul Coffee Stop.

2021 sees the 50th anniversary of Motul’s ground-breaking 300V engine lubricant, which was the first fully synthetic motor lubricant onto the global market.

A number of celebratory events have been taking place throughout the year and the Goodwood Revival will feature a tribute to legendary British motorsport marque, BRM, which is proudly presented by Motul.

Motul is also the presenting partner of one the Revival weekend’s feature races, the St Mary’s Trophy for classic saloon cars mainly from the 50s, with everything from Austin A40s to Mk1 Jaguars and even a Ford Thunderbird – driven by some of the world’s top historic racers, who are teamed up with professionals ranging from touring car legends, to Le Mans winners and F1 stars.

Motul’s partnership with Goodwood, however, goes further than its presence and profile at the Revival.

It is a true working partnership, with the Goodwood fleet of work vehicles – including classic trucks and Land Rovers – running on, and being maintained with, Motul products.

The Revival will also be the first event since the launch of Club Motul, the brand’s new initiative in the UK to bring historic vehicle owners closer to Motul, to give them help, advice, special offers and access to events that Motul and partners are involved in.

A long-time highlight of Motul’s activities across the globe is the Superfan initiative, which gives Motul enthusiasts the opportunity to go places and do things that are truly extra-ordinary over the course of the year.

Goodwood is the subject of a Superfan competition and it is fitting therefore that Club Motul has provided the winner of this year’s Motul Superfan Goodwood initiative.

Tom Plastow, from Wiltshire, will enjoy an incredible day at the Revival, which will see him participate in a host of different money-can’t-buy experiences.

A number of other entrants for the Superfan competition have also been rewarded with tickets to the event.

The Goodwood Revival will take over Motul’s social media channels for the weekend, offering viewers not only a behind-the-scenes peek at what goes on at one of the world’s foremost historic motoring events, but also the chance to interact with what is happening over the course of the Revival weekend.

Motul UK Country Manager, Callum Goodland said: “We are both proud and excited to be so involved with one of the UK’s greatest historic motoring events.

“There isn’t anything that compares with the Goodwood Revival, with its mixture of incredible historic racing and pageantry.

“Motul has an incredible history and in this landmark year for Motul, we look forward to both further developing our partnership with Goodwood over the coming years, and to increasing Motul’s presence, in general, in the UK.”