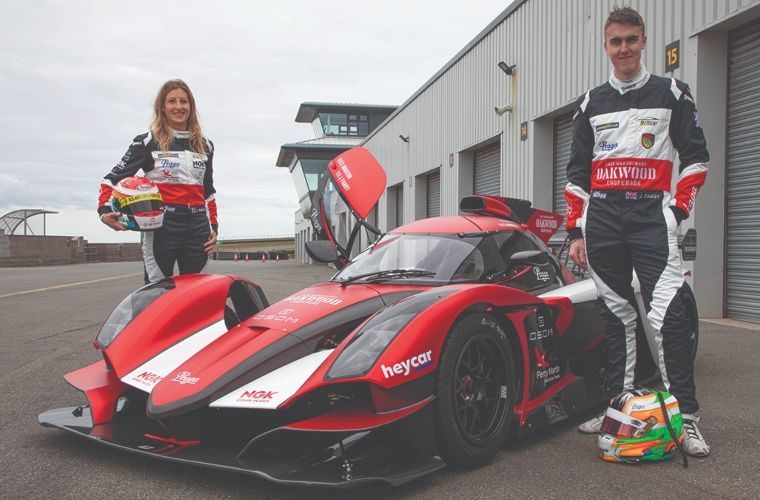 Racing driver Charlie Martin is set to compete in the 2021 Britcar Endurance Championship behind the wheel of a fantastic Praga R1 car sporting the iconic NGK colours.

Charlie – who is sponsored by ignition and sensors specialist NGK Spark Plugs (UK) Ltd – designed the livery of the stunning 365bhp race car which will compete in the Praga category of the championship which gets underway on April 24 at the Silverstone International circuit.

She said: “I was really grateful to be asked to design the car wrap and chose a red, black and white design.

“I love the way the design has turned out, it’s been so exciting seeing the car out on track.”

Charlie has been testing the Praga R1 on Anglesey and is looking forward to the first round of the championship.

She said: “Testing has gone pretty well. My teammate Jack Fabby narrowly missed out on the championship last year and I’m running just a second behind his times.

“However, the Silverstone circuit is a lot different than the one I’ve been testing on.

“The Praga R1 generates a lot of downforce and it will be a case of edging up the speeds when we get to test there.”

The Leicestershire-born driver last year achieved a fourth place finish in her first-ever 24-hour race at the World-famous Nürburgring circuit in Germany when she became the first transgender competitor in the history of the race.

“As well as being a fine driver, Charlie is a great ambassador for motorsport and NGK is proud to be supporting her for the 2021 season.”

FacebookTwitterMail
Previous Article3.8 million motorists admit driving without an MOT in the past yearNext ArticleMotul to become official lubricants partner to British F4