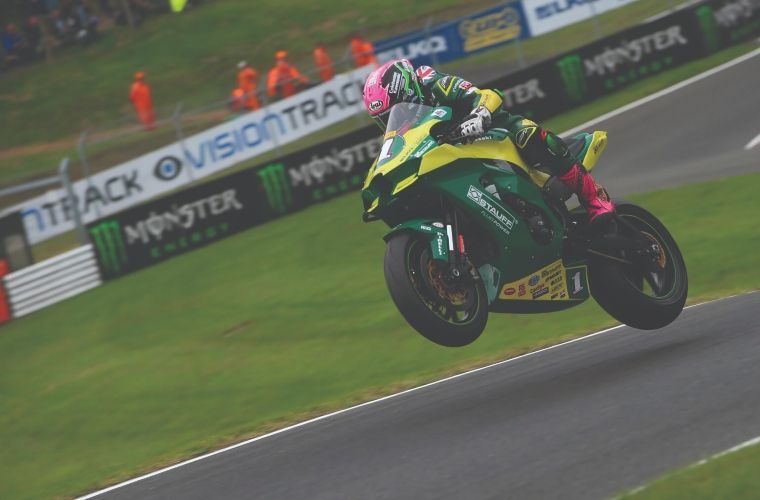 Defending champion Chrissy Rouse – who is sponsored by NGK – heads to the next round of the Pirelli National Superstock Championship in positive mood after a strong performance at Cadwell Park.

He took fifth place for the STAUFF Fluid Power Kawasaki team after a dramatic two-part race at the Lincolnshire circuit, but feels confident about the remainder of the season after making two great starts and leading the field for a number of laps.

Qualifying eighth for the 15-lap race, Rouse powered past five riders to take the lead, however just as he was passed by local rider Tom Neave on lap three, the race was stopped due to rain and re-started over 10 laps.

From second on the grid, Rouse got another fast start and shot back into the lead, holding on to it until lap five.

He managed to keep in second position until lap eight but didn’t have the pace to carry it to the finish and eventually crossed the line fifth.

He said: “I feel we made massive steps forward with the bike all weekend and that showed during the race.

“It was a great buzz going from eighth to first at the start of the first race it was really great to lead the race in both stints.

“In the end, we just didn’t have the pace to challenge for a podium but it’s clear how much progress we’ve made and I think we can take a lot away from this weekend and improve even more next time.”

Ignition and sensor specialist NGK Spark Plugs (UK) Ltd has been a long-time supporter of Rouse, who is currently in seventh place in the championship.

NGK Spark Plugs (UK) Ltd Marketing Manager Mark Hallam said: “Chrissy was in fine form at Cadwell Park and I’m sure will be looking to do even better at the next round as he strives to rise up the leader board.”