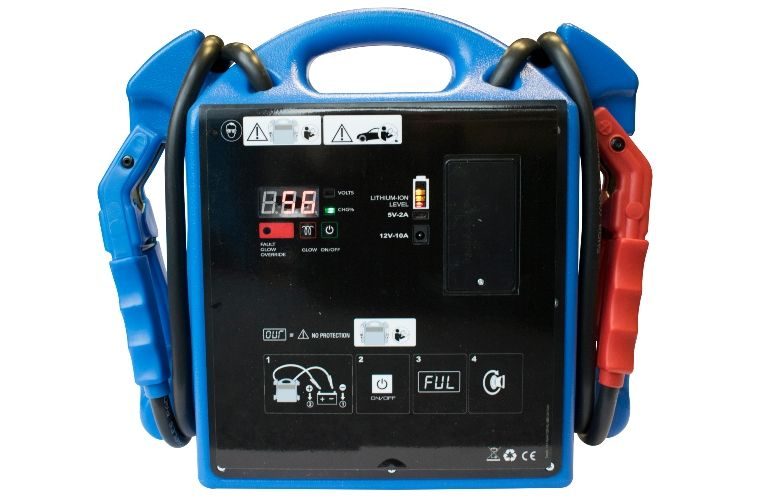 Even with a flat booster pack, it’s possible to boost a flat battery in as little as four to six minutes with the 341300SP ultra-lithium battery booster, Sykes-Pickavant says.

The first connection method to try is hooking the booster to the battery or charge points on the vehicle in need of starting.

The booster pack will then detect whether the flat battery has remnants of voltage left, if it does and the battery is able to provide a consistent voltage of four volts or more, this will be sufficient to pre-load the booster’s capacitor and start the vehicle.

It is important to note that the capacitor is only fully pre-loaded when there is an audible beep and the display shows ‘FUL’, not just 100 per cent.

If the voltage remaining in the battery is less than four volts or provides an inconsistent supply, an error message will be displayed on the booster.

In this case, the user should hold and press the power button for two seconds for the booster’s lithium battery to take over and pre-load the capacitor instead.

The display on the booster will now show ‘OUR’ instead of ‘FUL’ once fully loaded which indicates that the pre-loading has been performed by the lithium battery and is ready to boost.

The lithium battery also has the ability to hold power for an extended period of time compared to other battery types.

If the lithium battery doesn’t have enough power to pre-load the capacitor, the booster will alert the user with a secondary error message.

In this case, the capacitor can be pre-loaded from an alternative vehicle with a healthy battery, such as the recovery vehicle, ensuring that the vehicle’s flat battery can be boosted in practically any situation.

The operator also has the option to use a cigarette lighter capacitor pre-loader on the way to recovery, saving overall operation time.

Traditional booster packs often feature crocodile clamps which are live at all times the booster is on, which can cause spiking issues for vehicles with CAN Bus systems.

The 341300SP’s clamps are not live until the booster switches to output mode (FUL/OUR), ensuring this spiking issue is not encountered.