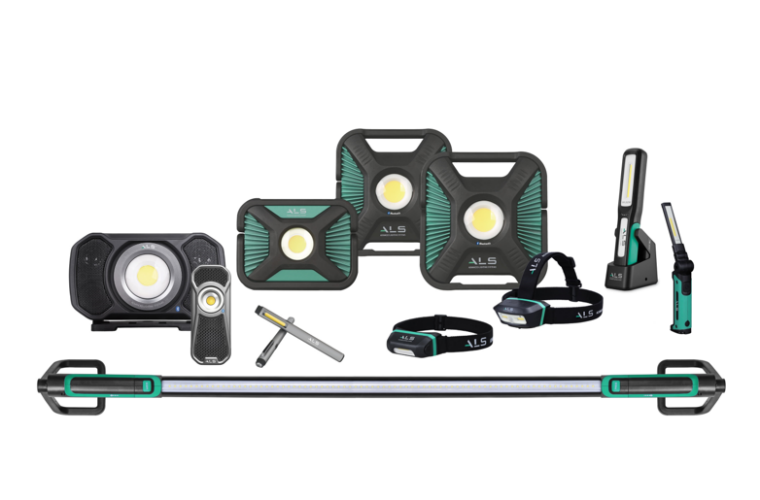 Sykes-Pickavant has said its new advanced lighting systems range has a lighting solution for every garage.

A Sykes-Pickavant spokesperson said: “From head lamps, foldable slim lights and straight folding lights, floodlights and bonnet lights to heavy duty work light with built-in audio capabilities, there’s sure to be an option to suit all requirements.”

The range has been recognized by leading industry experts; having received no less than seven Red Dot awards and three iF awards for a combination of quality, performance and style.

The ‘audio light’ range features heavy-duty work lights, each with a quality built-in speaker to eliminate the need for carrying lights and speakers separately.

Ranging from 600 – 5000 lumen, the series includes rechargeable and corded LED lights, all which feature Bluetooth connectivity to play audio with superior sound, pairing with the device in seconds.

The built-in power bank allows devices to be charged directly from the light via USB, removing the need for separate charging equipment.

The ‘floodlight’ series provides a complete and portable lighting solution with brightness ranging from 2,000 to 10,000 lumen.

The durable design features impact resistant aluminium housing which is rated at IP67.

Model SPX201R includes a heavy duty magnet for hands-free use and SPX601H, SPX601C, SPX10K1C can be used with an optional tripod.

SPX601C and SPX10K1C are corded whilst the SPX201R is rechargeable and the SPX601H has the option to be used either with or without the cable for further versatility.

Superior light for the work environment is provided by the high efficiency COB LED headlamp range which is available in two options; the 120 lumen HDL121R which features a wide beam angle design and the HDL251R which has three light modes – flood, spot and arc shaped.

For inspections in the most inaccessible and narrow work areas, the articulating slim light’s ultra-thin design is ideal for demanding inspection jobs.

Available in 200 lumen; model ASL201R and 500 lumen; model ASL501R as well as a 200 lumen UV; ASL202RUV, the front COB is useful for general lighting requirements and the top SMD LED can be used as a flashlight when closed or as a slim inspection light when unfolded with a depth of only 9mm.

The COB LED pivots a full 360° for easy handling and storage and all options feature a magnetic base for heavy duty mounting at any angle.

The ‘straight folding light’ series is a rechargeable and portable work light which features a dual light source combined of a front COB LED and top SMD LED, available as 200 lumen (SFL201R) or 500 lumen (SFL501R).

The flexible 180° bracket features a heavy-duty mounting magnet as well as a rotating flush mounted hook for hanging and carrying.

Both straight folding lights have an IP65 rating and are drop impact resistant.

2000lm models UHL201R and UHL201H include a detachable battery pack with the latter also providing the option for corded use and 1000lm model UHL101R features a detachable charging base which can also be used as a powerful flashlight.

All under-hood lights can swivel 360° on their coated brackets for illumination at any angle and are also compatible with a tripod when used with ACS201P – multi-functional fasteners.

A spokesperson for Sykes-Pickavant said: “All ALS lights come with a two-year warranty for added peace of mind and feature glow-in-the-dark case accents to locate the product in un-lit areas.

“After launching the range in time for the LAMMA 2019 show we are already starting to receive an impressive amount of orders and expect that our advanced lighting systems will continue to be a popular choice amongst garages.”

For further information about the range, follow the ‘more details’ link below.