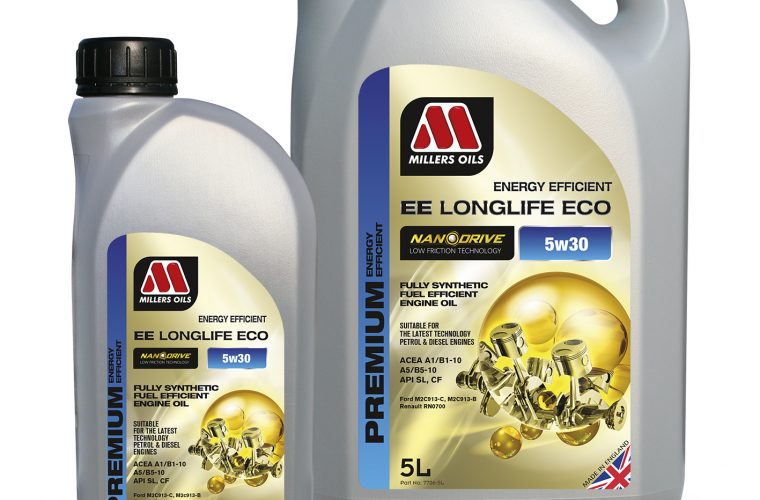 Specialist oil developer and producer Millers Oils has launched a new range of Energy Efficient oils, which have been proven to reduce fuel consumption and engine wear. The oils use Nanotechnology to reduce friction –  resulting in up to 2.5% improvement in fuel economy and up to 50% reduction in engine wear.

“Our Nanodrive Low Friction Technology was first used in motorsport gearbox and engine oils, allowing racers to release more power and torque by reducing frictional losses in the engine,” said Millers Oils technical director, Martyn Mann. “The same technology has allowed the design of our Energy Efficient engine and gearbox oils for the everyday car.”

You can improve fuel economy in an engine by using a lower viscosity of oil. Unfortunately, using traditionally formulated oil, the oil film thickness may be reduced at operating temperature to a point where component wear increases.Nanodrive technology overcomes problem. A lower coefficient of friction to be achieved, without changing the viscosity of the oil, so an adequate oil film thickness in maintained. This reduces running costs because less is used to turn the engine over without increasing wear.

Currently there are three different engine oils available in the Energy Efficient oils range covering both petrol and diesel vehicles. The formulations come in both full and semi synthetic form with viscosities of 5w30 and 10w40.

The friction that occurs within the transmission is also a contributor to a loss of efficiency. In a gearbox, the friction is caused when the components move against each other with a sliding and rolling action, this is different to the purely sliding action of an engine piston and requires a different oil formulation to absorb the extreme pressure created between metal components. A specially designed formulation has been created for the Energy Efficient range, EE Transmission 75w90.

Millers Oils range of Energy Efficient oils are now available throughout the UK. To find the locations of distributors please visit www.millersoils.co.uk.