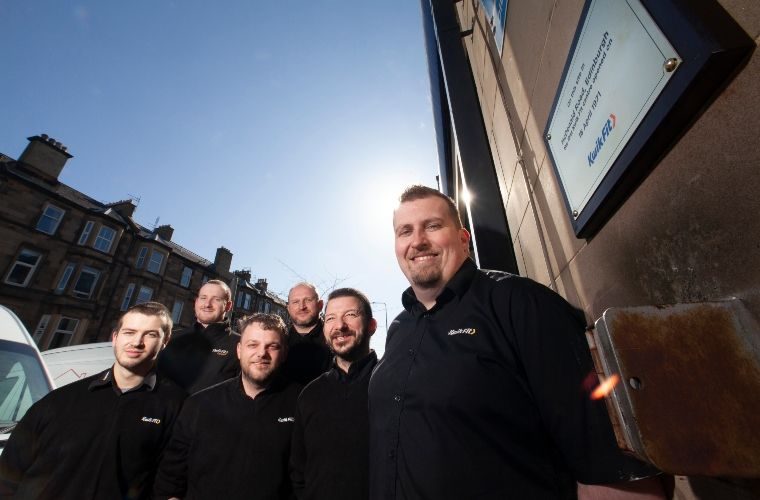 The anniversary was marked with a plaque at the McDonald Road centre to highlight the milestone date.

Friday 16 April marked the 50th anniversary of the first appearance of a brand that launched an entire automotive sector, the fast fit.

While the quality of work is regularly questioned by the independent crowd (cue that slogan), there’s no denying that it’s been a business success.

From a single location and a team of five, Kwik Fit now employs over 5,000 people in more than 600 centres across the UK, as well as operating the largest mobile tyre fitting fleet, with over 200 vehicles.

In addition to the UK operations, today there are also more than 240 Kwik Fit centres in the Netherlands, Italy and Hungary.

Over 50 years the company’s apprentice scheme has grown to become a training programme and now trains 150 new apprentices every year – more than 4,000 people have started their automotive careers as Kwik Fit apprentices.

A driver visiting the centre in 1971 would have had the option of perhaps 14 different tyres.

“Car technology has changed dramatically since then, but one thing which still runs through our core is the customer service ethos which the Kwik Fit team has focussed on every day since April 1971.

“We’re incredibly proud to have been keeping the UK safe on the roads for 50 years and look forward to the developments of the next half century.”

Sir Tom Farmer, who sold the company in 1999, said: “Although I moved on from the business many years ago, it still gives me great pride to see Kwik Fit at the forefront of the UK automotive industry.

“From the day we opened our first centre we set out the way we wanted to conduct ourselves and the relationship we wanted to have with our customers.

“We eventually put that in writing as the Kwik Fit Way and I think that is important in the brand’s longevity – having a consistent set of values at the heart of an organisation is vital if it’s going to last and stay relevant.”

Kwik Fit’s plans for the near future include increasing the number of technicians trained in servicing electric vehicles, further development of its mobile fitting service – which is already the largest fleet in the UK, rolling out calibration services for advanced driver-assistance systems (ADAS) and increasing its network of MOT centres that are directly connected to the DVSA system.