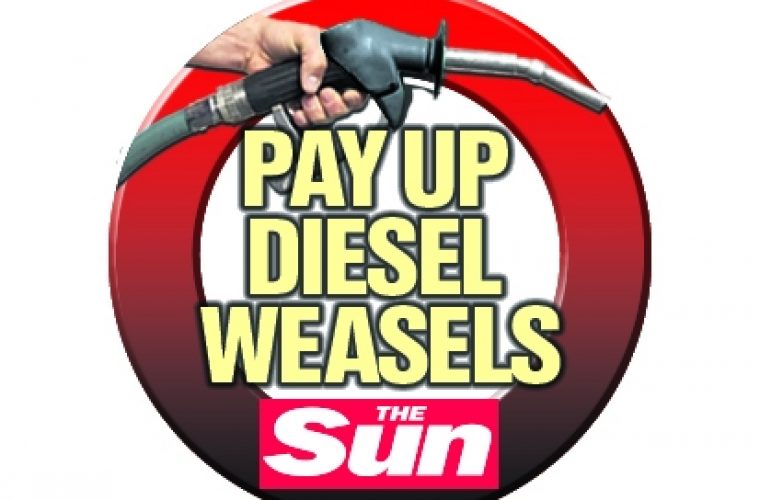 The Sun has launched a campaign for compensation for the millions of drivers ‘seduced into buying diesel cars’ .

The ‘Pay Up Diesel Weasels’ campaign calls on the Government to introduce a new scrappage scheme and is backed by the RAC, the AA and the Road Haulage Association.

Almost 11 million people have been encouraged by successive governments to snap up the “greener” vehicles since 2001, when then-Chancellor Gordon Brown increased excise duty for petrol cars with higher carbon dioxide emissions. The number of diesel car owners in the UK has rocketed from 1.6 million to 11 million in the space of a decade.

But major cities are now planning to punish diesel drivers with a £10-a-day tax because of other killer fumes which are linked to the fuel. A move to add a diesel-levy on the congestion charge was unveiled by London Mayor Boris Johnson last month following Britain’s failure to meet air quality targets set by the European Union.

Motoring groups yesterday backed the scheme as RAC technical director David Bizley said: “There’s a lot of merit in a scrappage scheme for older diesel vehicles. But the Government also need to be able to say how they can help drivers who have recently bought diesel.”

Road Haulage policy director Jack Semple said: “If the emission standards are not delivering, that’s not the fault of the Mayor of London. It’s Brussels that set the route map so, if that’s taking us to the wrong place, it’s not the right approach to fine people. There’s a lot of merit in a scrappage scheme, certainly for more heavily-polluting HGVs.”