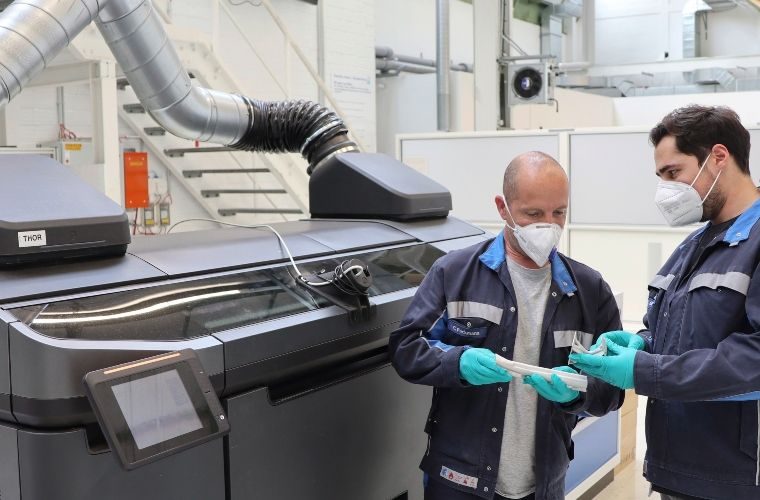 Volkswagen is pressing ahead with the use of innovative 3D printers in car production.

For the first time, the newest process – known as binder jetting – is being used to manufacture components at the company’s main plant in Wolfsburg, Germany.

Whereas conventional 3D printing uses a laser to build a component layer by layer from metallic powder, the binder jetting process uses an adhesive.

The resulting metallic component is then heated and shaped. Using the binder jetting component reduces costs and increases productivity – for example, the components weigh only half as much as those made from sheet steel.

Volkswagen is currently the only car maker using this 3D printing technology in the production process.

Christian Vollmer, member of the board of management of the Volkswagen brand responsible for production and logistics said: “Despite the ongoing challenges of the coronavirus pandemic, we’re continuing to work on innovation.

“Together with our partners, we aim to make 3D printing even more efficient in the years ahead and suitable for production-line use.”

Volkswagen has invested an amount in the mid-double-digit million euro range over the past five years. In addition, the company has entered into a software partnership with Siemens and expanded its existing collaboration with printer manufacturer HP Inc.

HP is providing the high-tech printers needed and Siemens the special software for additive manufacturing.

One key process step that has been worked on jointly by Siemens and VW is optimising the positioning of components in the build chamber.

Known as nesting, this technique makes it possible to produce twice as many parts per print session.

From summer, the three companies intend to establish a joint expert team at the high-tech 3D printing center which opened in Wolfsburg at the end of 2018 and enables the manufacture of complex automotive components using 3D printing.

The first components made using the binder jetting process have gone to Osnabrück for certification: components for the A pillar of the T-Roc convertible.

These weigh almost 50 per cent less than conventional components made from sheet steel.

Volkswagen has been using 3D printing for 25 years, starting in technical development with the goal of accelerating vehicle development and reducing costs.

Today, there are 13 units at the Wolfsburg plant using various printing processes to manufacture both plastic and metal components.

Over the past 25 years, more than one million components have been produced.