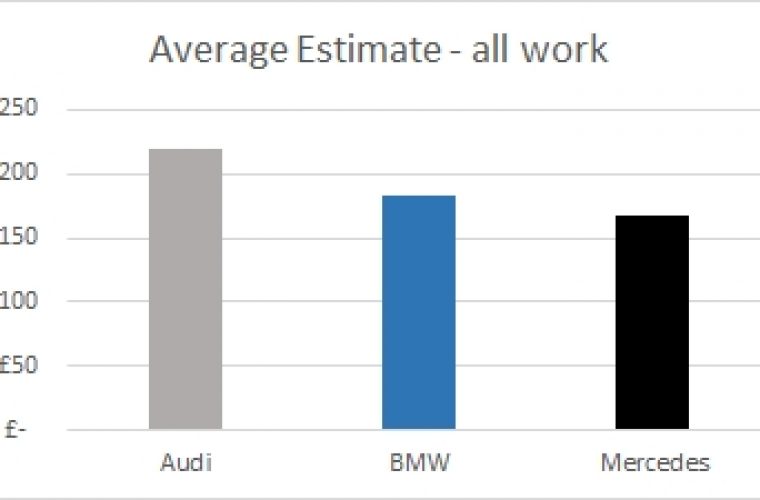 WhoCanFixMyCar.com (WCFMC) have looked at the data generated from their network of almost 5,000 garages nationwide to compare maintenance costs of these German heavy-weights.

It revealed Audi came out the dearest by 19% with BMW sat a little above Mercedes. WCFMC then tried to get under the skin of this trend to understand the difference.

While the absolute numbers differ, the trend remains – on A3, A4 or A6, average repair estimates on Audis remained highest – with the largest difference apparent when comparing C-Class and A4 repair quotes.

When it comes to routine work, including wear parts such as brakes, estimates across all three brands are comparable. Indeed, Audi quotes are marginally cheapest for brakes and exhausts. On transmission work, including cambelt changes, Audi was significantly the most expensive.

When looking at the age of cars, it really does seem that Mercedes cars ‘go on for longer’, with repairs most likely in 11-year-old cars. WCFMC suggest all those taxi drivers the world over are onto something. Conversely, the majority of Audi repairs take place when the cars are 5-10 years old, with BMW somewhere in between.

Repairs ‘tail off’ at 12 years across all brands for WCFMC. At this age, cars begin to cover fewer annual miles, operating as second cars or local runarounds, or for owners are happier to live with the smaller quirks and issues that would tend to be put right in a newer car.

So, Audis do cost more to maintain than their premium German stablemates, driven by dearer major work, which tends to occur when the car is a little newer. Mercedes, meanwhile, are inclined to last a while longer before the ‘compulsory pitstops’ really kick in.

You can view all of this in a handy infographic now with the ‘More Details’ button below.