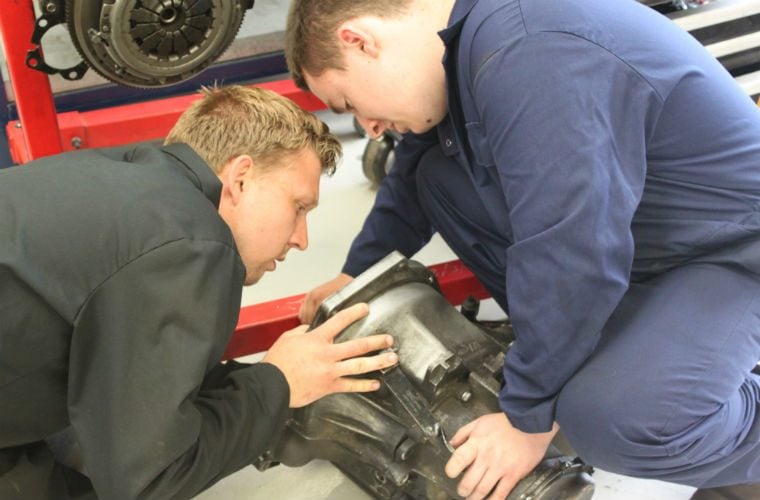 Students at Bridgwater and Taunton College.

A young technician has returned to his college, Bridgwater and Taunton College, to talk to the next generation of mechanical experts about his journey to an award winning business owner, with the help of Al Preston, co-founder of WhoCanFixMyCar.com (WCFMC).

Presenting to a room of 16-20 year old apprentice technicians, Joe Stevenson explained how his life had been turned around after setting up his own business, Delilahs Mobile Mechanics, in 2016.

He said: “I left college with qualifications but I didn’t know what to do with my life, so I started working in a restaurant.

“After that, I decided to join the army and was sent to Kenya and around Europe where I utilised the skills I had picked up in college.

“Eventually I came back to England and started working in a garage.”

While working for another technician, Joe discovered WCFMC and after using the platform to generate work for his boss, he realised he could go solo with the amount of business available on the platform.

He added: “I joined WCFMC as a mobile mechanic and in a few months I had won over 200 jobs, I was so successful that I was awarded Best Mobile Technician 2016 in the WCFMC garage awards.

“You guys might not know what you want from life, but I’m here to tell you that you can be successful in the automotive aftermarket if you work hard.

“It is a cut-throat industry but being a member of this platform has allowed me to run my own successful business.”

WCFMC’s Al Preston told students: “We are currently generating over 45,000 service and repair jobs every month.

“The average invoice value per booking is £288 so you can imagine how much money is available to members like Joe.

“There is a huge opportunity for digitally savvy technicians because there is so much work waiting to be claimed online.”

Bridgwater and Taunton College provides practical and academic training at its specialist automotive branch, where young people are able to develop their skills as technicians.

For further information about WCFMC, follow the ‘more details’ link below.