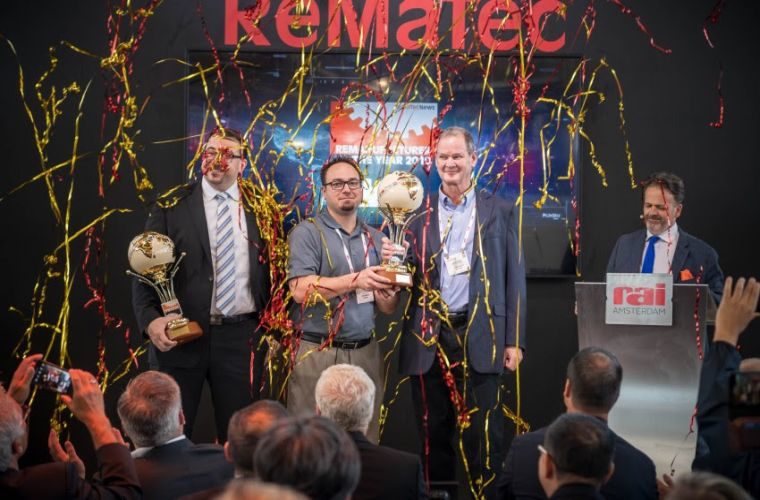 Applause for the winners of the RotY Awards 2019.

The Remanufacturer of the Year (RotY) Awards are the most prestigious awards of the industry for Best Reman Business Innovation, Process Optimisation and Reman Ambassador.

Adam Hill, editor of ReMatecNews, announced the winners during the award ceremony at ReMaTec 2019 at RAI Amsterdam.

Judged by a panel of remanufacturing industry experts on a set of criteria, the following winners are deemed to lead the industry forward.

The jury said that, “Knorr-Bremse’s fully-digitalised core return and sorting process satisfies customer and remanufacturing process demands: operators now use touchscreens to identify and sort cores, with 1,500 part numbers handled, in a system which is integrated into SAP with a real-time view of all sorting data and stock.

“The judges were impressed by a complete process which allows a full track and trace from the customer’s pick-up request, goods receipt and core identification up to surcharge refund booking.”

Daniel Koehler, remanufacturing director of Knorr-Bremse commened: “It’s a very nice appreciation from the community and the experts that honour and recognise all the efforts that Knorr-Bremse has done in the last few years.

“We implemented, about six or seven years ago, remanufacturing in our overall aftermarket strategy to make it a real pilar.

“We have a full reman plan and we have our own reman programme brand, which is called EconX.”

The jury explained: “CRP Industries is the parent company of Atlantic Automotive Enterprise, a remanufacturer of electrical power steering systems.

“Its introduction of lean principles and semi-automation to its supply chain management system – often a challenging task to perform – impressed the judges.

“These innovations have been implemented in most of the company’s reman process steps and have been shown to have a really positive effect on efficiency, supporting an aggressive EPS launch plan.”

“We are a third generation family-owned company, and we are a smaller company in the reman industry.

“We recognise what competition we have is in terms of companies that have been remanufacturing for decades, which are some very big names.

“We’ve been doing this since 2015 and we believe we are at the forefront of technology in what we do and it’s great to be recognised for that.”

“A co-founder of the ReMaTec exhibition, Fernand Weiland has been in management positions responsible for aftermarket and remanufacturing operations over the last 30 years or so with companies including Bendix, Lucas and TRW. In 1989 he founded APRA’s European division and served as chairman for more than 20 years,” said the jury.

“From 1990 to 2012 he organised a considerable number of APRA forums, workshops and exhibitions across Europe – and as a consultant he has published many articles and several books on reman.”

The jury believes that, “he [Fernand] has worked tirelessly to exchange knowledge and promote remanufacturing to businesses and policymakers – and the industry has no better friend than Fernand.”

Fernand Weiland was unfortunately not able to attend the awards ceremony in order to receive the RotY Award in person.

He reacted to his win by saying: “It is a great honour for me and a great pleasure today to receive the prestigious RotY Award for Ambassador.

“In my long career in remanufacturing, I got a lot of satisfation to work with the reman family.

“In the past we have celebrated many events, but I must say today is one of the biggest for me if not the biggest.”

Remanufacturer of the Year Awards

ReMaTecNews’ Remanufacturer of the Year Award is the most prestigious honour in remanufacturing.

Founded in 2005 and now in its 14th year, the prize is given to a person or business that has served remanufacturing with particular distinction.

Over its lifetime, the award has celebrated the achievements of some of the reman industry’s most prominent names.

Within the industry it is considered a milestone. The jury includes the following members:

Adam Hill: Chairman of the jury, Editor of ReMaTecNews, UK

Tessa Vlaanderen: Manager, programs and planning at the resource productivity and recovery authority, the Netherlands

For more information on ReMaTec, click the ‘more details’ link below.