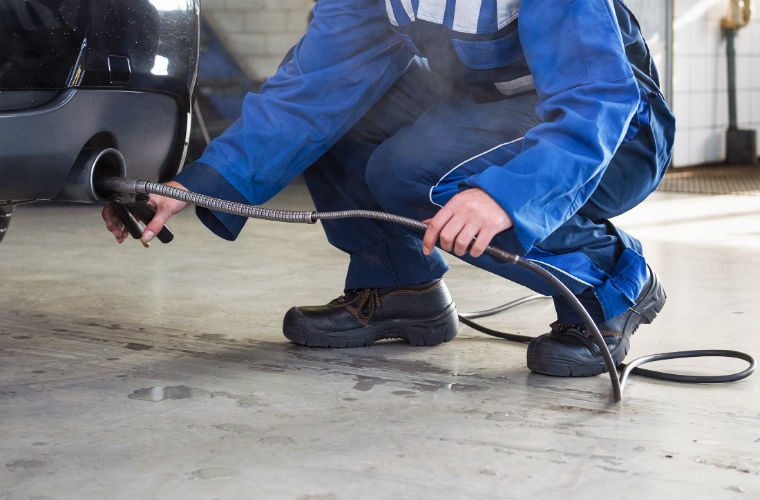 The current MOT is failing to identify many cases of DPF removal because it only includes a ‘visual inspection’ of the hardware. Image: Bigstock.

MOT changes designed to make it easier for testers to detect vehicles with failing or removed DPFs are expected to be introduced next year, the Department for Transport (DfT) has told GW.

From May 2018 the smoke test limit for Euro 6 and some Euro 5 diesels will also be halved.

In a statement obtained by GW, a DfT spokesperson said: “We are taking strong action to stop the removal of DPFs.

“We expect future changes to the MOT emissions test for diesel vehicles, due to come into force by May 2018, to make it easier to detect vehicles with failing or removed DPFs.”

The DVSA say 1,800 cars have been caught without a DPF since 2014 but experts believe the number is much higher and suggest that the current MOT visual inspection is unfit for purpose.

While it is illegal for drivers to use a car with the DPF removed, it is not illegal for garages to take them out.

Some workshops are known to offer removal services with the claim that removal will improve the vehicle’s performance, or is cheaper than replacing the current DPF.

Speaking to GW, head of research and development at Klarius Products, Doug Bentley said: “The reality is that the functional part of a DPF is a ceramic block inside a tough metal casing, it is brittle and can be drilled through and/or smashed, so the functional part of the device is removed and the casing is simply bolted back into the exhausts system.

“From the outside it looks like all is well.

“However, removing the filter element not only releases clouds of harmful soot but often the ceramic brick is also a catalytic converter, so harmful exhaust gases can also be released into the air too.

“If a new test can show-up when the DPF is an empty casing, not just missing from the system, then this practise of removal may stop, or reduce, which will be a good thing for the environment, the car’s engine and the customer’s wallet at the pumps.”

Diesel particulate matter is damaging to the heart and lungs and has been linked by The World Health Organisation to 38,000 premature deaths every year.

Speaking earlier this year, MOT product manager at the DVSA, Danny Charles said: “Remember, the consequences of turning a blind eye to a missing diesel particulate filter – or worse, actively taking part in their removal – can be serious for an MOT tester.

“A vehicle that needs a particulate filter and doesn’t have one should fail its MOT.

“If you pass it knowing that it doesn’t have one, you’re harming the environment and committing fraud.”

However, many argue that the DVSA needs to do more to make data readily available for testers.

Commenting on GW recently, technician David said: “DVSA really need to be clear about which vehicles are actually fitted with DPFs to ensure testers are also made properly aware of which vehicles they should be fitted to.

“DVSA have taken a back seat with the VMs and gaining technical information.

“It’s time they put their foot down and got it then pass it onto the test stations that need it to do the job correctly.

“I for one still don’t know which vehicles are supposed to be fitted with a DPF.

“I came across a Transit with no exhaust system on seeing only a tail pipe mounted at the exhaust manifold area, thinking that some clever trader had removed the DPF.

“I failed it, only to find later from Ford that they didn’t fit a DPF to that model of Transit.

“Testers have got the short straw here.”

Do you think more needs to be done to tackle DPF removals? Share your comments below.