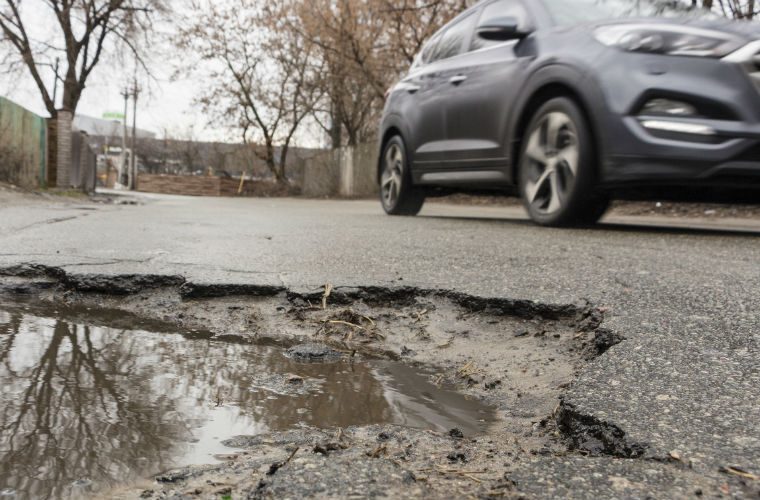 July to September 2021 saw the RAC deal with the largest ever proportion of pothole-related call-outs in any third quarter since 2006.

RAC patrols attended 1,810 breakdowns for broken suspension springs, distorted wheels and damaged shock absorbers which represented 1.2 per cent of all its call-outs over the three-month period.

July to September, along with October to December, are normally the quietest quarters for pothole-related breakdowns, both in terms of pure numbers and in terms of the proportion they represent of all RAC breakdowns.

When looking at the proportion of pothole call-outs as a rolling average of the last four quarters there is a worrying increase in the share of these breakdowns as they represent 1.5 per cent of all RAC call-outs – the highest such figure seen in the RAC’s Pothole Index data since the four quarters to the end of September 2018 (1.5 per cent).

RAC head of roads policy Nicholas Lyes said: “With government data showing weekday car traffic is still not quite back to pre-pandemic levels it’s very worrying that our patrols are still attending a higher proportion of pothole-related call-outs in relation to all the breakdowns they go out to.

“While it’s welcome that the sheer number of pothole breakdowns is not as high as we’ve seen in previous years, we see worrying signs in our data that implies little progress has been made in the last 12 months in improving road surfaces for drivers.

“We fear we’re only a bad winter away from seeing a plague of potholes which authorities will struggle to repair.

The RAC Pothole Index is a long-term measure of the condition of roads which is adjusted for weather and seasonal effects.

As of Q3 2021 it stands at 1.48, down from 1.51 in Q2 – it means drivers are nearly one-and-a-half times more likely to breakdown after hitting a pothole today than they were when the RAC first started collecting this data back in 2006.

The RAC Report on Motoring 2021 once again named the poor condition and lack of maintenance of local roads their top concern.

This year, 46 per cent of drivers say that the state of local roads is one of their four biggest motoring-related concerns, sharply up from 38 per cent 12 months ago.

Well over half (58 per cent) of drivers believe local road conditions where they live have deteriorated over the past year, a rise on the 52 per cent recorded in 2020 and 49 per cent in 2019.

Nicholas added: “Relying on just patching potholes is a fruitless task which simply pours good money after bad as it only acts as a sticking plaster.

“This will anger drivers incredibly as they already feel not enough of their motoring taxes are invested in keeping roads up to a respectable standard.”

New research from the RAC Report on Motoring 2021 shows that drivers would very much like to see at least some of the revenues raised from the likes of Vehicle Excise Duty (VED) (‘car tax’) and fuel duty ring-fenced for spending on local road maintenance.

This year, 81 per cent of drivers support this idea, an almost identical proportion to 2020 (82 per cent).

At present, revenues from VED in England are used to fund maintenance spending but only on the motorway and high-speed road network. What’s more, three-quarters (74 per cent) take the view that the motoring taxes they already pay are not sufficiently reinvested into local roads.

Drivers are on the whole happier with the state of the UK’s motorways and major A-roads.

Only 11 per cent cite the state of motorways and high-speed roads as a main concern, although 28 per cent still say that the condition of these roads has deteriorated over the past 12 months.

Nicholas Lyes added: “We have long campaigned for national government to recognise the significance of local roads and ring-fence funds over a five-year period to enable councils to plan and deliver longer-term road maintenance.

“If the coming winter proves to be colder than normal as some are predicting we could sadly see our roads crumbling yet further, costing drivers hundreds of thousands of pounds in repairs.

“We’re sounding the alarm now so that this doesn’t happen, but we badly need the Transport Secretary and the Treasury to take a fresh look at how local roads are funded.”