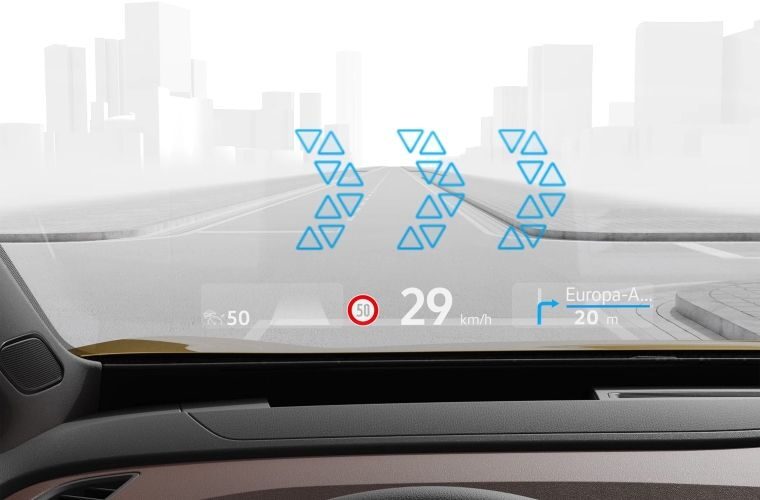 Volkswagen is the first carmaker to boast augmented reality head-up display in the compact segment, offering drivers of its new all- electric ID.3 and ID.4 models information projected into the driver’s field of view.

The large window for the dynamic displays is located in the driver’s field of view at a virtual distance of around 10 metres and has a diagonal measuring around 1.8 metres.

Information from the assist systems as well as the turn arrows and starting points and destinations of the navigation system are displayed in this far-range window.

This shows the driving speed, road signs, and assist and navigation symbols as static displays. They appear to float around three metres in front of the driver.

Frank Welsch, member of the board of management for development at Volkswagen said: “We have introduced a genuine innovation in series production and we have done this not in a premium vehicle, but in the compact models of the all- electric ID. family.

“Making pioneering technologies available to a large number of customers is a core competency of Volkswagen.”

When the vehicle approaches a junction where it should turn off according to the navigation route, the driver sees two indications: in the first step, an advance notification on the road level, and then three arrows located at the junction.

The closer the driver gets to the junction, the larger the arrows become.

At the same time, their textures fade in order to ensure a clear view of the road.

The ‘lane assist’ ADAS function is also visualised in the far-range window: if the vehicle moves closer to a boundary line at the edge of the road without indicating, this line is displayed in orange.

Two green lines appear after switching on Travel Assist, which keeps the car in the middle of the lane.

When following another vehicle, the display marks the vehicle in front with a coloured stripe as soon as adaptive cruise control (ACC) or travel assist is activated.

When the assist systems are switched off, the driver sees a red warning signal if they drive dangerously close to the vehicle in front.

The technical heart of the augmented reality head-up display is the picture generation unit (PGU) display located deep inside the dash panel.

The beam bundles generated by an especially bright LCD display are transmitted onto two flat mirrors, and special lenses separate the portions for the close and far range display levels.

The flat mirrors deflect the beams onto a large, electrically adjustable concave mirror.

From here, the beams reach the windscreen and thus enter the driver’s field of view.

The driver sees the symbols with the same sharp definition as the real world at an apparent distance of just under 10 metres.

The images are generated by an AR creator located in one of the two central computers in the ID. models.

VW 2.0 TDI engine: Everything you need to know

The AR creator calculates the positioning of the symbols corresponding to the surroundings.

To make these calculations, it receives information from the raw data of the front camera, radar sensor and navigation map.

The displays that appear in the large window are stabilised with respect to the vehicle’s movements and adapted to the geometry of the optical projection system.