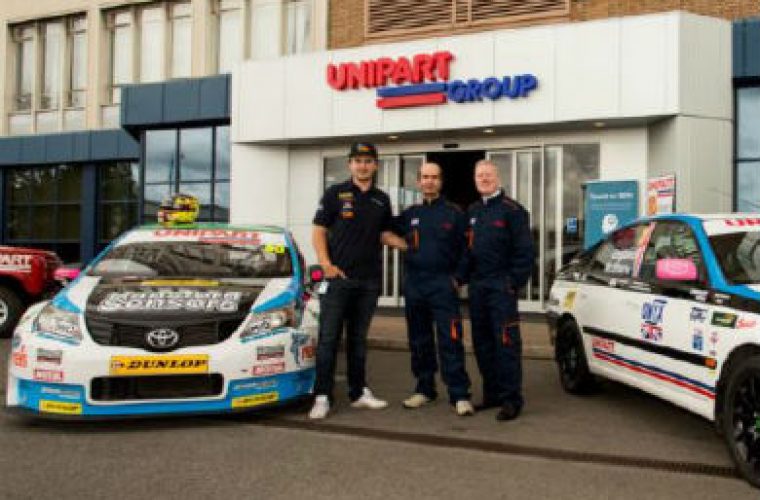 Tom Ingram with Malcolm England and Phil McShane who work at Unipart Autoparts and are part of the Bangers for Ben team (right to left).

British Touring Car Championship star, Tom Ingram, who is sponsored by Unipart Autoparts, visited Unipart head office in Oxford to show support for a team of employees who are taking part in a 2,000-mile trip for BEN, the automotive industry charity.

A number of employees from Unipart Autoparts, a global distributor of car, van, truck and trailer components, will be taking part in Bangers for Ben in October and driving 2000 miles from Oxford to Maranello in Italy and back in a 17-year old Toyota Avensis, which is ‘cloned’ to look like Tom Ingram’s flagship car.

Employees from across Unipart met the Speedworks Motorsport team, including Tom Ingram, and were also able to sign the bonnet of the Bangers for Ben car in return for a donation to the charity, which raised £400.

Unipart Autoparts managing director, Tony Sackett said: “We are delighted to be supporting Speedworks Motorsport this season and it’s great to welcome the team to Unipart House to gain additional sponsorship for BEN, which is a charity that we have supported for many years.

“The Unipart brand has long been affiliated with motorsport, and we are excited to be continuing this with Tom and the rest of the Speedworks team.”

The Bangers for Ben team have so far raised more than £12,000 towards their £25,000 target, donations can still be made on Just Giving.

For further information about the charity event and to make a donation, select ‘more details’ below.