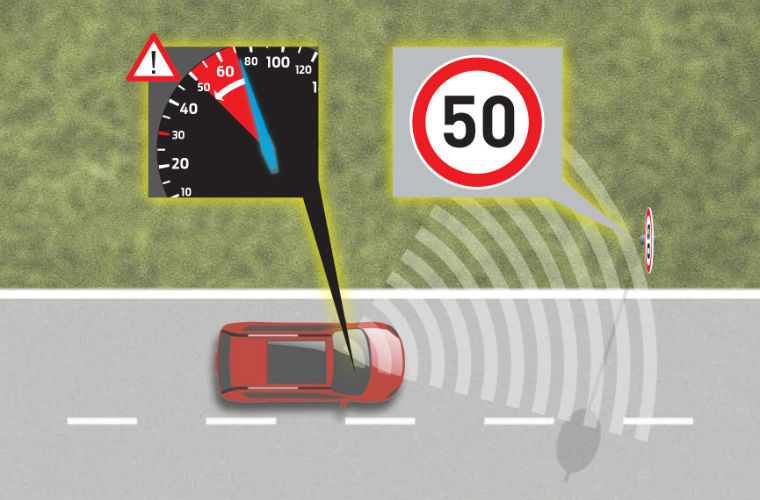 Campaigners welcomed the move, saying it would save thousands of lives.

Speed limiting technology looks set to become mandatory for all vehicles sold in Europe from 2022, after new rules were provisionally agreed by the EU.

The Department for Transport said the system would also apply in the UK, regardless of the outcome of Brexit.

Road safety charity Brake called it a “landmark day”, but the AA said “a little speed” helped with overtaking or joining motorways.

Other measures to be introduced

“The vast majority of these accidents are caused by human error.

“With the new advanced safety features that will become mandatory, we can have the same kind of impact as when safety belts were first introduced.”

How does the tech work?

Under the ISA system, cars receive information via GPS and a digital map, telling the vehicle what the speed limit is.

This can be combined with a video camera capable of recognising road signs.

The system can be overridden temporarily.

If a car is overtaking a lorry on a motorway and enters a lower speed-limit area, the driver can push down hard on the accelerator to complete the manoeuvre.

A full on/off switch for the system is also envisaged, but this would lapse every time the vehicle is restarted.

You can override limiter

The BBC’s Theo Leggett analysed the dilemmas drivers will face and how the new system will actually work. He said: “The idea that cars will be fitted with speed limiters – or to put it more accurately, “intelligent speed assistance” – is likely to upset a lot of drivers.

“Many of us are happy to break limits when it suits us and don’t like the idea of Big Brother stepping in.

“However, the new system as it’s currently envisaged will not force drivers to slow down.

“It is there to encourage them to do so, and to make them aware of what the limit is, but it can be overridden.

“Much like the cruise control in many current cars will hold a particular speed, or prevent you exceeding it, until you stamp on the accelerator.

“So it’ll still be a free-for-all for speeding motorists then? Not quite.

“Under the new rules, cars will also be fitted with compulsory data recorders, or “black boxes”.

“So if you have an accident, the police and your insurance company will know whether you’ve been going too fast.

“If you’ve been keeping your foot down and routinely ignoring the car’s warnings, they may take a very dim view of your actions.

“In fact, it’s this “spy on board” which may ultimately have a bigger impact on driver behaviour than any kind of speed limiter.

Recording your every move

“It’s easy to get away with reckless driving when there’s only a handful of traffic cops around to stop you.

“Much harder when there’s a spy in the cab recording your every move.”

What do you think of intelligent speed assistance? Will it help solve any confusion around accident blame or is it a step too far? Let us know in the comments