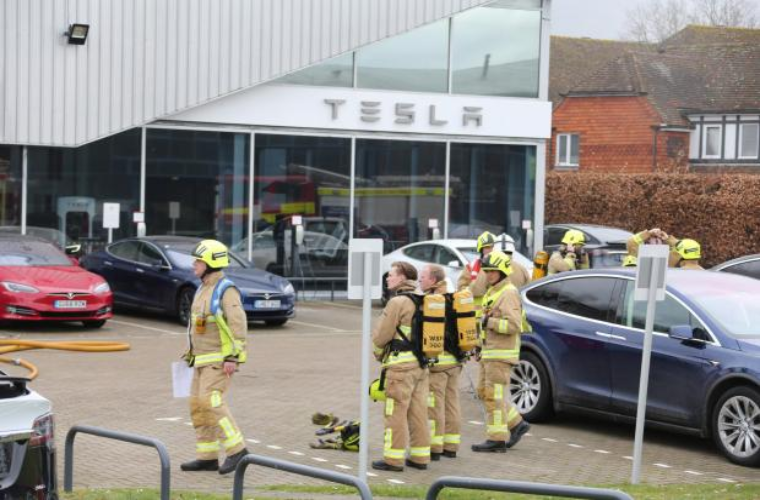 Fire crews on the scene at Tesla in Crawley.

A fire at a Tesla car service centre which damaged at least half of the site was not caused by Tesla cars, chargers or batteries, West Sussex Fire and Rescue Service has said.

The “significant fire” broke out in the workshop area of the premises in Crawley, West Sussex, just before 10:30am on Saturday.

More than 50 firefighters and eight fire engines were sent to tackle the blaze, which was brought under control three hours later.

A spokeswoman for the fire service said around 50 per cent of the building had been damaged by fire and heat.

A spokesperson for West Sussex Fire and Rescue Service said: “The cause of the fire is under investigation but was not caused by Tesla cars, chargers or batteries.

“The fire is thought to have started in the storeroom.

“Crews were greatly assisted by Tesla staff on site.

“At its height, eight fire engines including crews from Surrey Fire and Rescue Service, assisted in tackling the fire.”

A Tesla spokeswoman added: “The fire at Tesla’s Gatwick Service Centre has stopped and we are working with the fire department to learn more about what caused this incident.

“We can confirm that no Tesla staff or customers were injured or hurt.”