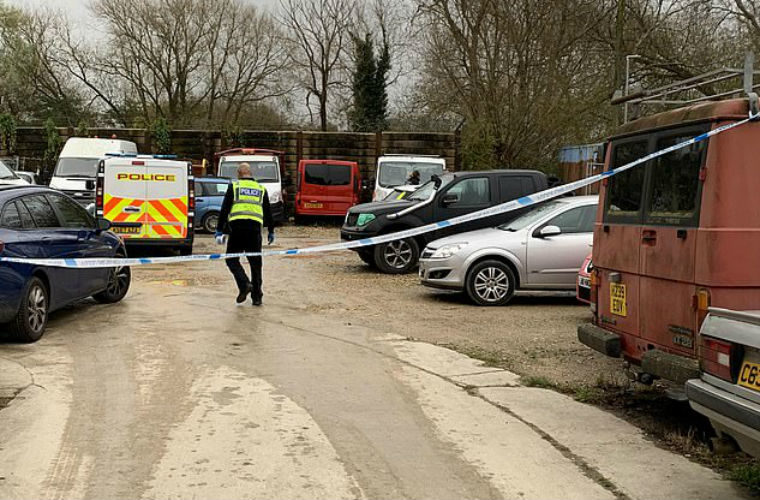 Police on scene at JB Autos.

A man has been crushed to death while attempting to steal a catalytic converter under the cover of darkness after breaking into a garage compound in Swindon, Wiltshire.

The jack supporting a blue Vauxhall Astra while Gary Gray was underneath slipped, causing the full weight of the vehicle to slam down and suffocated him.

His body was discovered the following morning by Vilfredo Fernandes, an employee of JB Autos, as he opened up for work on November 15 last year.

The shocked assistant manager of repair garage JB Autos saw the 38-year-old’s legs sticking out from under a car stored in one of the company’s two locked compounds.

Mr Gray’s hands were covered in dirt and oil, a torch he had been using was still on and a cutting tool was gripping part the car’s exhaust.

Nearby were mole grips and a backpack containing spanners, cooking foil, a watch, and a bottle of methadone.

In a statement read out at Mr Gray’s inquest this week, Mr Fernandes said: “I arrived around 8am and I could see a pair of legs on the floor sticking out from under a car which had a black car-jack near the front wheel.

“I called my boss, told him what happened, and he told me to call an ambulance.”

Police later established that he had been trying to steal a catalytic converter, thought to have a re-sale value of around £60, from the vehicle,

JB Autos manager James Brown said: “There is a six-to-eight feet-high fence around each compound and I keep scrap cars for spare parts inside the second.

“Over the years I have had a number of thefts, so I keep the vehicles unlocked to stop people damaging them and smashing the windows before they realise there’s nothing valuable inside them.

“The vehicles are left in gear with the handbrake off to stop the brakes seizing.”

It is believed that this caused the car to move while Mr Gray was fiddling with the Vauxhall’s underside, with fatal consequences.

Sgt Scott Anger, who investigated Mr Gray’s death, said: “He was in the process of stealing a catalytic converter but his chest had been compressed.

“He had gained entry illegally overnight.

“This was not an industrial accident and was filed as a non-suspicious sudden death.

“The car jack had been dislodged.

“He had placed a wooden panel under him to prevent him lying on the cold ground.

“This raised his body closer to the car, which was left in neutral and would have rolled off the car jack because it was not secure.”