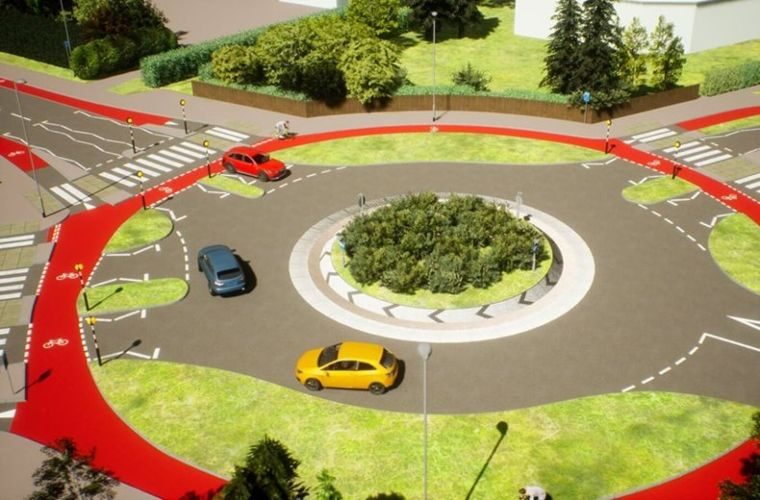 A new ‘Dutch-style’ roundabout which gives priority to cyclists and pedestrians over motorists has this week been opened in Cambridge.

The roundabout is the first of its kind in the UK and is designed to ensure drivers give way to bicycles when entering and exiting the roundabout at the red cycle lane that circles the junction.

All entry and exit roads feature narrowed lanes to encourage motorists to reduce their speed and take more time to adjust to other road users.

The new roundabout is found at the meeting of three major roads; Queen Edith’s Way, Fendon Road and Mowbray Road.

A central over-run area will allow larger vehicles to manoeuvre round the roundabout.

Cyclists commuting to nearby Addenbrooke’s Hospital and Cambridge Biomedical Campus will also benefit from new safety features, including zebra crossings on every arm of the junction.

Although bicycles are given equal priority with pedestrians, cyclists must slow down and check roads are safe before crossing.

Cllr Lis Every, vice-chairwoman of Cambridgeshire County Council, cut the ribbon at Fendon Road last Friday alongside cycling supporter cllr Noel Kavanagh and Koen Guiking from the Embassy of the Kingdom of the Netherlands.

Speaking at the official opening, Cllr Ian Bates said: “I am delighted to see the completion of improvements to this roundabout, which aim to improve safety at this busy junction and encourage more people to walk and cycle.

“It is great to see Cambridgeshire leading the way in implementing the first truly Dutch inspired roundabout that improves safety for vulnerable users, ahead of recent nationally published government guidance that strongly promotes this type of infrastructure.”

Do you support cycle-friendly road design? Share your comments below.