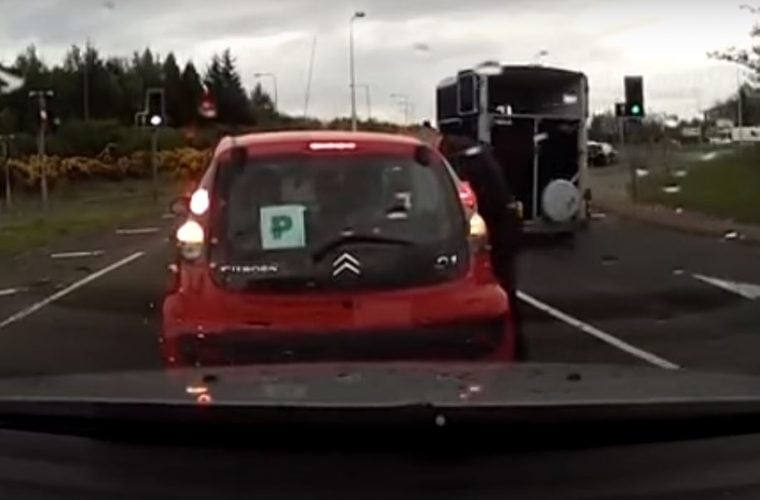 The young woman put her hazards on and ended up stalling 13 times in a row.

The embarrassing incident was caught on dash cam by James Johnston of Bathgate, Scotland.

A young female driver can be seen struggling to get to grips with her clutch control behind the wheel of a red Citroen C1.

She makes the first stall as soon as the traffic lights turn green, closely followed by another 12 stalls before she even goes through the lights which change three times before she finally gets going again.

Johnston waits patiently behind the panicking driver for more than a minute before getting out to offer some words of encouragement.

The father-of-two said: “I felt really sorry for her.

“I approached the Deer Park roundabout and came up behind her.

“Because she had the P-plate displayed I could see she was a new driver.

“I waited behind her but I could see she couldn’t find the balance between the clutch and the gas.

“Every time she tried to set off she stalled.

“It seemed as though she was stressed.

“Eventually I decided to just get out and speak to her.

“She was really embarrassed.

“I just told her to take her time, take a deep breath and try and feel her biting point before giving it plenty of gas.

“She seemed to get her confidence back after that.

“I’d say she was only around 18 or 19 and she had clearly only recently passed her test.”