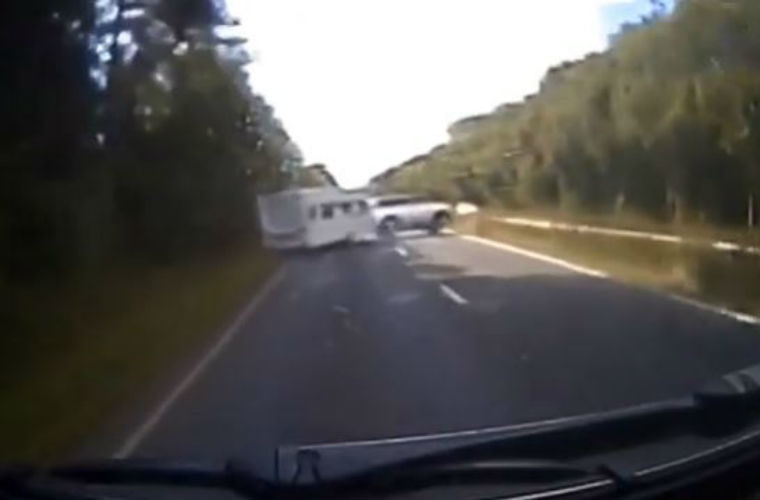 Shocking dash cam footage has shown the horrifying moment a car towing a caravan flipped over on a dual carriageway and the miraculous unscathed escape of a pet dog.

The video, recorded from the cab of a HGV, shows a Land Cruiser towing a caravan overtaking in the outside lane.

The driver of the car quickly loses control as the caravan suddenly begins to violently ‘snake’.

The video then shows the car turning up on to two wheels and rolling numerous times.

As the car begins to roll, so does the caravan, sending debris across the across the road.

The car ends up in the central reservation while the caravan blocks the dual carriageway.

During the terrifying clip a dog is seen to fly out of the car but miraculously walked away from the crash unscathed.

The incident took part on the A380 at Chudleigh, Devon and was captured on the dashcam of an HGV driver.

Dan Combellack, 36, posted the clip online and claimed the motorist towing the caravan was travelling too fast to do that safely.

He wrote: “I seen the caravan overtaking me and thought was a little fast. At the bottom of the hill, all vehicles bottom out a little that’s why started snaking.

“I knew what was going to happen so I started slowing down.”