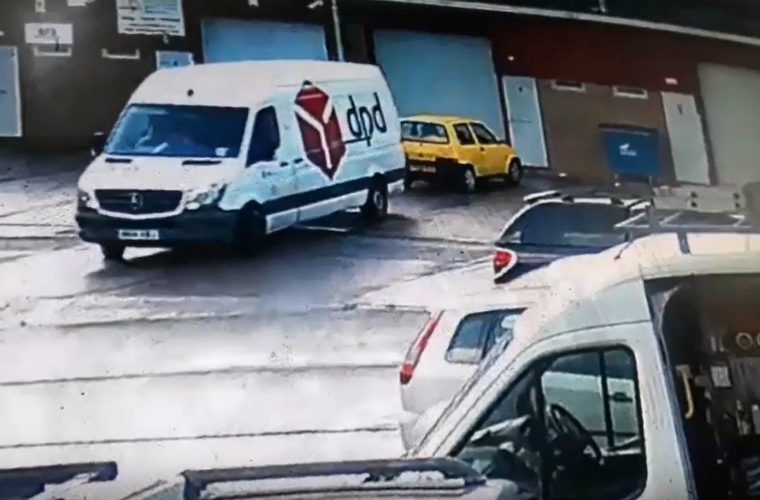 A delivery driver left the scene of the accident after checking to see if anyone had spotted him.

A DPD driver has been sacked after he was caught reversing into a mechanical engineer’s car and then checking no-one had seen the incident before driving off.

The careless driver reversed the van into a small car with enough force to push it back a few feet – causing damage worth at least £1,200.

CCTV then showed the DPD man get out and check in all directions to see if anyone is watching.

Wrongly believing he has got away with it, the driver reverses and almost hits the car again before driving off.

What the driver did not realise is that a security camera was watching over the industrial estate in Telford, Shropshire.

The owner of the damaged Fiat, mechanical engineer Ashley Whitsey, 26, got hold of the footage filmed last month and used it to get DPD to claim liability.

DPD has confirmed the driver who hit Ashley’s Fiat will no longer be working for them after he breached policy by leaving the scene of an accident without reporting it.

Ashley shared the video online with the caption: “Let’s see how this hit and run claim goes.”

After the accident, the DPD driver got out and went to the back of the van to inspect the damage.

Ashley explained that the Fiat is his “weekend toy” used for racing.

He said: “The biggest annoyance for me so far is I’ve missed a few races and will miss a few others as I’m trying to get one of my other cars finished.”

“DPD has admitted liability but will probably drag this out and then write it off.”

He added: “The driver managed to shove my Fiat a fair few feet with it parked in gear.

“He was the perfect height to hit the rear tow bar and twist it up damaging the boot floor and rear panel of my car.”

A spokesman for DPD said: “DPD has a strict policy that all accidents must be reported immediately.

“Leaving the scene of an accident and not reporting it is a serious breach of that policy.

“The driver concerned was a cover driver and will not work for DPD again.”

Let us know what you think of the incident in the comments.