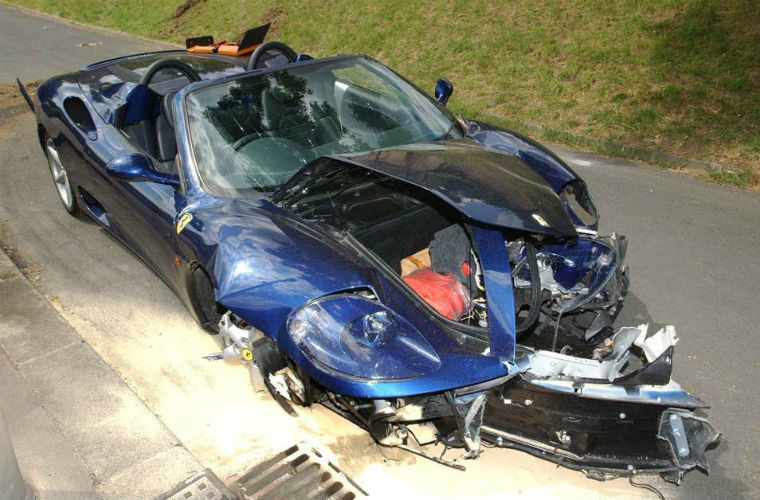 A Ferrari which was notoriously crashed by Arsenal’s Ian Wright is at the centre of a High Court battle over its repairs and sale for £45,000.

The ex-England striker was at the wheel of the Ferrari 360 Spider when it crashed into a tree and veered down a grass bank in July 2004.

The incident caused extensive damage to the front end of the supercar.

In 2013, Australian car enthusiast Reid Torr bought the car and had it shipped to Australia, but now claims salesman Brendan Connor made “fraudulent representations” to conceal lasting damage to the vehicle.

However Mr Connor, who advertised the sports car in Autotrader on behalf of the owner, insists he is not a mechanic and the car had no visible faults when he sold it.

In April, Judge Alistair Wilson QC found that Mr Connor had fraudulently misled Mr Torr, awarding him more than £45,000 in damages for the price of the car plus shipping costs.

But this week Mrs Justice Foster granted Mr Connor permission to appeal against that ruling, questioning the finding of “fraud and dishonesty”.

Mr Torr got mechanics to look over the car when it arrived in Australia and said they declared it a “dog” which had been crashed and then “poorly repaired”.

He discovered through the DVLA that the car, worth £120,000 when new, had been crashed by Wright.

When Mr Torr complained the salesman said any damage must have happened during shipping, or that if it existed before that he was unaware.

Judge Wilson ruled: “I find it difficult to imagine that an experienced car dealer… would not have looked the car over sufficiently thoroughly to spot at least some of the numerous defects.”

“Unsupported by evidence and illogical”

Appealing against the ruling, Mr Connor’s barrister Varun Zaiwalla said the finding was “unsupported by evidence and illogical”.

He argued Mr Torr must prove the car dealer knew about the crash before the sale went through.

Mrs Justice Foster granted permission to appeal, saying: “My concerns centre on the manner in which the judge came to his conclusions of fraud and dishonesty.”

A full appeal hearing will take place at a later date.