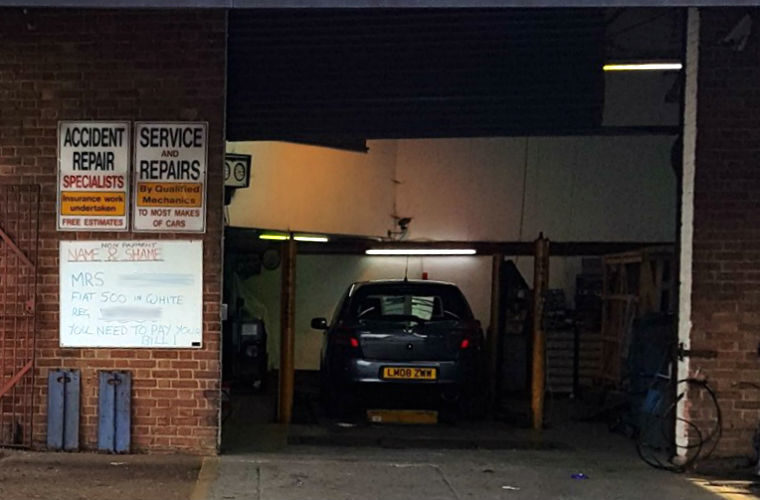 The owner of a white Fiat 500 is currently named and shamed on the white board which is shown outside the workshop on the left.

MOTaPlus Ltd in Croydon has taken to naming and shaming non-paying customers by writing their name and vehicle details on a white board located outside the workshop for all to see.

Garage owner, Gary Pritchard told GW that he adopted the board “out of principle” after helping a customer only for them to bounce a cheque for a £40 MOT.

“Put it up out of principle”

He said: “I first put it up out of principle after a customer came in for an MOT following a recommendation.

“She called us up, desperate for a test because she didn’t have an MOT but it was a Saturday and we were fully booked up.

“To help her out though, we told her to come down and we’d get it done to get her out of trouble.

“We MOTd the car and it failed on a couple of bulbs and a few other small bits, which we put right and didn’t even charge her for it.

“She wrote a £40 cheque out for the MOT and off she went.

“A couple of weeks later, we noticed the cheque didn’t go through and after looking into it I found out that she parked around the corner and stopped the cheque.

“From there on, the board has stayed up.”

Gary says the board has gone down well among his genuine customers, with many finding it amusing and even taking photos of it.

He added: “I’ve not had many on there at all and those that have been on there have had plenty of warning.

“It’s all about embarrassment.

“I trust everyone on face value and if they fail to pay I’d rather just embarrass them and warn other garages around here.

“It’s not about the money, it’s the principle.”

Currently the owner of a white Fiat 500 features on the board of shame after failing to pay two bills for a clutch and a master cylinder.

Gary said: “The lady that’s on there at the moment is local.

“I’d rather embarrass her than waste my time chasing”

“I know where she lives and I could go and knock on her door but I’d rather embarrass her than waste my time chasing her.

“We fitted a new clutch and we told her it had a fault on the slave and master cylinder but she didn’t want it repaired at the time.

“Of course, that soon failed but we put it right for her.”

The lady in question had already made a couple of payments towards her initial bill for the clutch replacement and made one more following the later repair but has since failed to make any further payment.

How do you deal non-paying customers? Share your comments and experiences below.