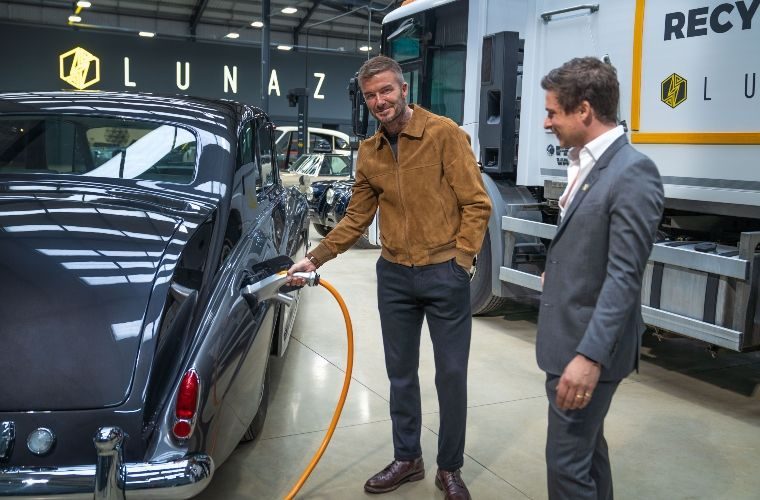 Lunaz is a rapidly growing technology company that upcycles and converts motor vehicles to its proprietary electric powertrain.

David Beckham is joined as an investor by the Reuben and Barclay families and Alexander Dellal.

David said: “Lunaz represents the very best of British ingenuity in both technology and design.

“I was drawn to the company through their work restoring some of the most beautiful classic cars through upcycling and electrification.

“David Lorenz and his team of world-class engineers are building something very special and I look forward to being part of their growth.”

Through his investment arm Beckham has successfully identified and backed fast-growth start-ups in sectors as diverse as eSports and athletic recovery products.

He took a 10 per cent stake in the company.

Since Lunaz started production of its first cars in 2019 it has drawn an entirely new generation to some of the most revered marques in history.

It is the fastest-growing and now largest company by manufacturing space and employees within the Silverstone Technology Cluster.

David Lorenz, founder and CEO of Lunaz, said: “The upcycling of existing passenger, industrial and commercial vehicles presents a sustainable alternative to replacing with new.

“Our approach will save fleet operators capital while dramatically reducing waste in the global drive towards de-carbonisation.

“There is evidence everywhere in the global economy that responsibility and commerciality are no longer mutually exclusive.

“This top tier investor commitment is testament to Lunaz’ path to defining the market for remanufacturing and conversion to clean-air powertrains.”

Following this injection of growth capital Lunaz is announcing ambitious plans to grow its offering to the upcycling and electrification of industrial vehicles on a mass global scale.

Lunaz will begin with industrial HGV vehicles including refuse trucks, of which 80 million currently exist in the UK, EU and USA alone.