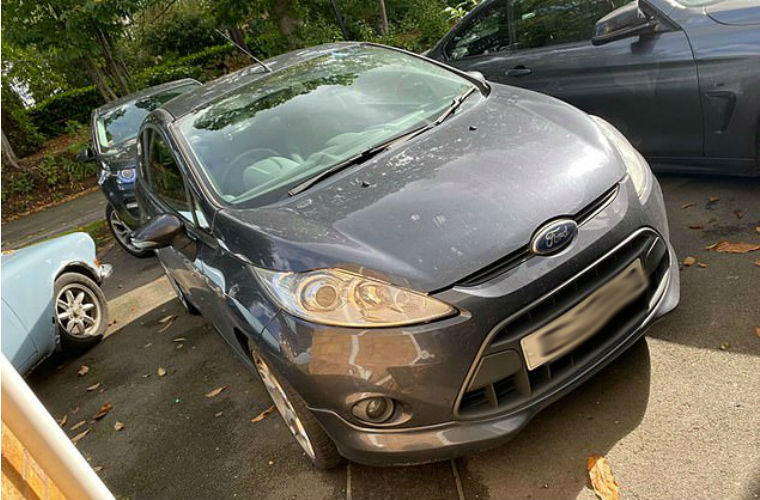 A female motorsport mechanic has advertised her brother’s car in ‘idiot terms’ after becoming frustrated with men who try to knock down the price.

Laura Jones, from Coventry, wrote the hilarious advert on Facebook after her younger brother asked her to help sell his Ford Fiesta.

The advert, which mocks the car’s 2009 number plate, its changing colour at night and the fact that it’s a fiesta, has since been shared more than 25,000 times has 44,000 likes.

She also joked about the type of buyers she’s had to experience in the past – claiming that the price of £2750 was not negotiable – and wouldn’t accept ‘payment plans or take £500’.

Emma posted: “So as my brother is away with work he has, for some reason, asked me to sell his car for him, (god only knows why anyone would ever ask me to do such a thing!) so here it goes.

“Not a flying carpet”

“The car is grey – don’t ask me what shade of grey it is, all I know is it’s a special colour changing paint as it looks black when it’s dark… as does everything else around it – funny that.

“It is a 1.6 tdci (a diesel) – it’s good on fuel – no this doesn’t mean you can throw a fiver in it, break down after 80 miles then ring me saying I lied about the fuel economy – use your noggin.

“The car is a three door – one door on the left, one door on the right and a tailgate to the rear – you may use any of those doors to enter and exit the vehicle if you want to mix things up a bit.

“The car is open to a full inspection – this can include seeing which awfully cheap lowering springs you could order off eBay for it.

“How big the boot is to fit your sub woofer in, which you’ll secure with a bungee and used red bull cans.

“How many 99p blue bulbs you can fit into the interior lighting and of course, how many storage compartments there are to keep your grinder and 10bag for your career in herbal dealing.

“So, the car is up for sale for £2750 – that does not translate to any of the following…I offer payment plans. I’ll take £500. I’ll hold onto it for 3 months whilst you save up your dole money.

“I’ll loan you the car with the promise you’ll pay me for it to then have it returned to me by the old bill after it was used for a day light robbery (not my 1st choice for a getaway car I must say).

Emma ends the advert with: “Last but not least, if you happen to be that absolute k***er who comes to view the car, realises I’m of the female kind and attempts to tell me how the car is broken in anyway shape or form, I promise to waste a minimum of 50 minutes of your time going along with your lies.

Following the advert, Laura told reporters: “I posted it the way I did because I honestly hate selling cars due to the amount of idiots it seems to attract.

“So I simply worded the advert in idiot terms and for some reason it just blew up.

Despite the attention, the car is yet to sell.