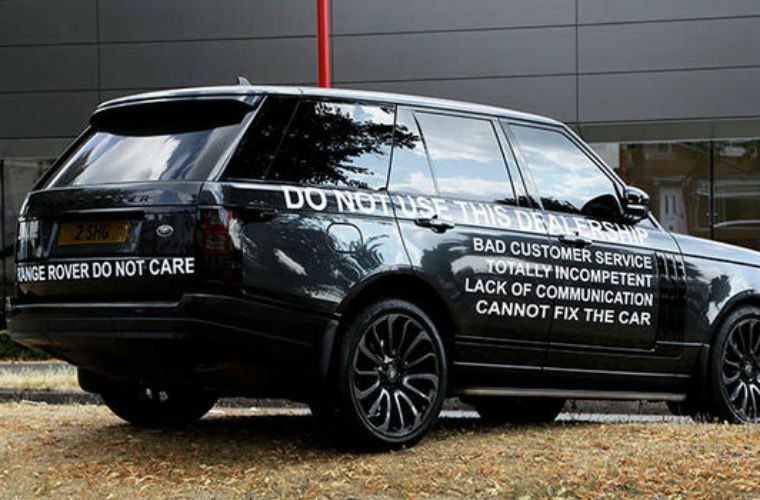 The Range Rover was spotted by a number of locals who shared pictures on social media.

A frustrated owner has dumped his Range Rover Vogue outside the main dealer he bought it from in protest of alleged poor customer service.

The owner claims to have experienced numerous problems which have been left unresolved and arranged for vehicle signage to warn off potential customers.

Alleged faults include issues with the suspension, gearbox and five other ‘common’ issues.

The signage read: “Range Rover do not care.

“Do not use this dealership.

“Nothing was being done”

The driver, who has asked to remain anonymous, said: “I was on hold on the phone for five and a half hours when I first complained a week and a half ago.

“Nothing was being done.

“So I went to a specialist graphic designer to mark the car with the words I wanted.

“Then I decided to park it outside the dealership as I thought ‘I’m not going to let this happen to anyone else’.

“I’ve since been contacted several times by the dealership.

“They’ve even offered me free champagne, but I don’t drink.

“All I want is for them to fix the car.

“We’re in disputes at the moment.

“But I have given them the spare key and said ‘bring it into the garage, fix it and drop it back off outside my house’.”

The £63,000 car was purchased in 2016 from Lancaster Land Rover dealership in Tyburn Road, Eddington.

A spokesman for the dealership said in a previous statement: “We do not discuss individual customer cases.

“A general manager and a representative from Land Rover are meeting with the customer on site to agree a way forward.”

The car has since been spotted parked up outside the dealership by a number of passing drivers, many have shared pictures on social media.

Well another customer must have more to complain about than me! Fair play direct action. A few more turning up in the coming weeks?

Glad you blocked me from trying to relsolve and issue that you never did #RangeRover #customerService pic.twitter.com/qZ4i6cluBi

@Lancaster_LR your Erdington dealership service department is horrendous I thought it was just me but its that bad its driven one of your customers to have their expensive Range Rover sign written and parked up outside the premises on a busy main road. Great customer relations pic.twitter.com/Kin0dhpPvE

Home Page › Forums › “Do not use this dealership”, Range Rover owner warns customers about main dealer