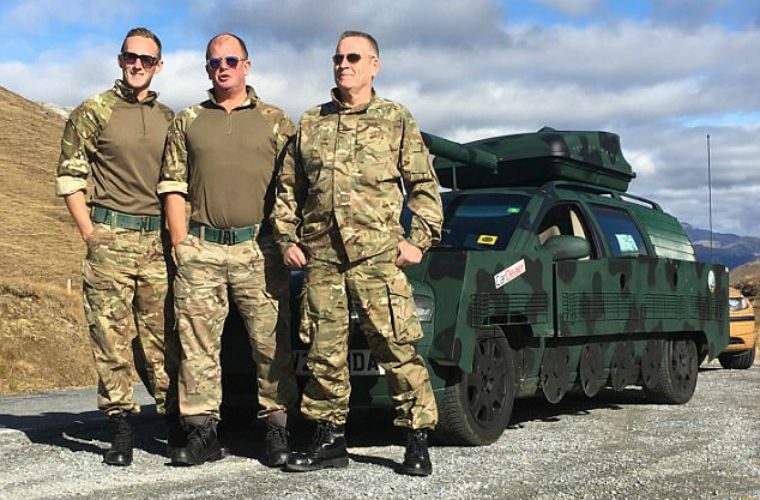 The team drove the tank for three days through France, Switzerland, Italy and Luxembourg.

A group of technicians converted their Volvo V70 into a mock military vehicle before driving it for 1,500 miles across Europe for Bangers4Ben.

Graham Smith from Shepshed in Leicestershire and three of his friends put more than 50 hours into the conversion.

Bangers4Ben is an epic road trip on which 45 teams drive to and from a different location somewhere in Europe each year.

Each team buys an old banger for less than £750, paints or decals it and then selects a fancy dress outfit to drive in.

This year’s event theme was ‘The Alpine Special’ as the chosen destination was the Swiss Alps, which saw teams driving some of the most scenic roads that Switzerland has to offer.

He explained: “The border guards were just so suspicious and they were giving us a lot of funny looks.

“They could have just opened fire on us at any time.

“The whole event was like Mad Max and I think most officials over there were concerned about the car’s safety but each time they just let us go.

“At one point we got asked if we had any guns with us.”

Graham added: “The materials were mostly second-hand bits and bobs, a bit of plastic and wood.

“The car was originally blue, but we used some stencils and a paint roller to get the right look.

“We’re just happy to have raised the money for charity.”

Kelly Neal, head of events at Ben said: “We were really impressed with this year’s entries – in fact, we are amazed by the creativity and effort that the teams put into transforming their bangers every year.

“We’re delighted with the impressive fundraising amount this year and we can’t thank all of the teams and their sponsors enough for helping us to support colleagues in our industry.”

0 0
Previous ArticleDoes your workshop have the right heater?Next ArticleAutoinform LIVE pulls in praise from delegates