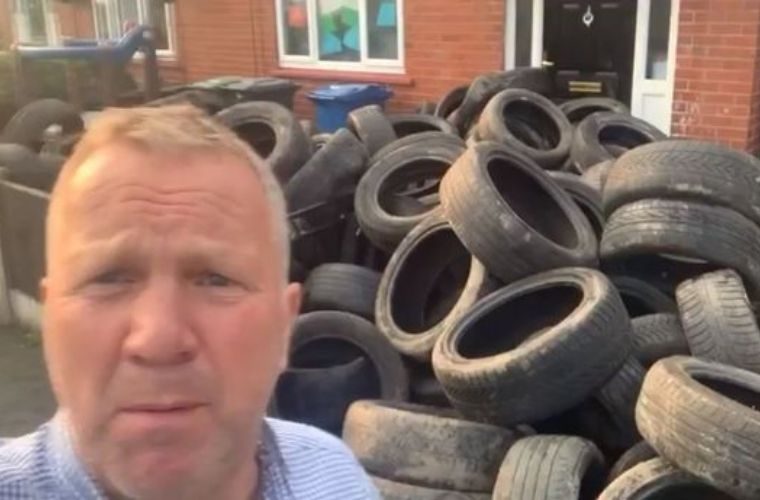 A farmer who had 421 tyres dumped on his land has returned them to the doorstep of the fly-tipper.

Stuart Baldwin caught the fly-tipper on CCTV on his land in Wigan, Lancashire and gave them three days to remove the waste.

After failing to retrieve them, Stuart returned all 421 tyres.

Footage shows Stuart talking to the camera, saying: “We have come to my land and somebody has put these tyres here overnight.

“Luckily, we found out who has forgotten them, so we are going to take them back to the person who put them here, thank you.”

A second video shows a tractor trailer reversing back into a driveway, before depositing the tyres on the unsuspecting homeowner’s front garden.

Around eight men at the scene throw the tyres into a garden, Stuart then shouts: “I got about to 421 [tyres], but there might be a bit more.”

A photo then shows the house’s front garden completely covered in the rubber.

Stuart then takes another video of himself saying: “Done now, given them back, so thank you.”

Stuart’s daughter Megan, 25, said: “We wish no harm to him or any property hence why we placed them in his garden without causing any damage, we just want to prove a point that you can’t just go around fly tipping wherever you want as it isn’t fair.”

Martin Montague, creator of the fly-tipping reporting app and website ClearWaste.com, said: “Farmers like him are plagued with fly-tipping and it costs them a fortune to get it cleared up.

Related: Tyres over ten years old to be banned on heavy vehicles

“We need bigger fines and more prosecutions so the more people that report fly-tipping on our app, the more action we’ll be able to take again waste criminals.”

ClearWaste.com says fly-tipping up 76 per cent this year with criminals taking advantage of closed and restricted tips due to the coronavirus to rip off householders by claiming to be legitimate waste carriers.

According to the commons library, the penalty for fly tipping can be a fine of up to £50,000 and up to 12 months imprisonment if convicted in a Magistrates’ Court.