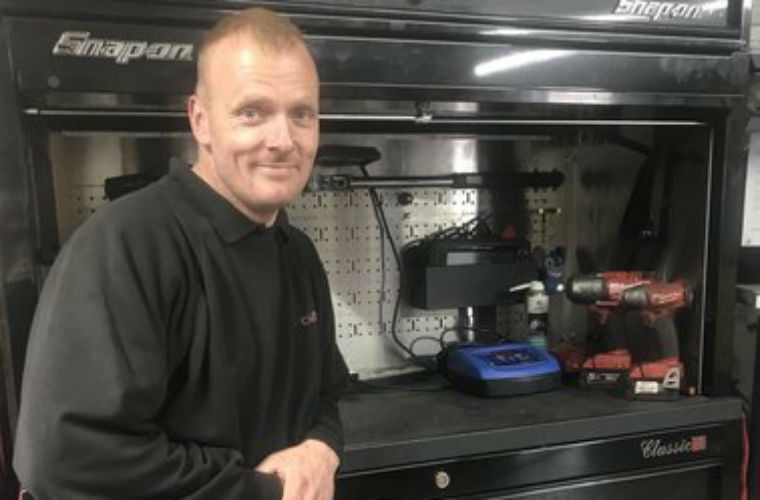 Andy’s Autos is a member of WhoCanFixMyCar and since signing up to the platform at the start of 2016, it has won 217 jobs and received 121 five star reviews from customers.

Owner Andy Wells says: “I had worked as a technician growing up but eventually went into the civil service working for the Highways Agency in my early twenties.

“The money and benefits were good but after a few years, I was bored out of my mind.”

In 2012, Andy and his wife bought a new house which had a large garage; however, Andy wanted to use the space for play instead of work.

“We filled it with boys’ toys.

“We put a fruit machine in there as well as table football and speakers.

“It was fun for a while but after a while, I thought the space would be better used to repair cars.”

“Andy’s Autos was launched out of the garage in 2013 but three weeks later, I suffered from a massive stroke.

“The doctors told me that 90 per cent of people who suffer from that type of stroke die, so I am incredibly lucky to be here today.”

‘Would stop at nothing’

After a six-month recovery period, Andy was back at the Highways Agency but once more decided that the only thing he wanted to do was run his own business and so returned to Andy’s Autos full time in 2015.

“As well as being unwell, I had lost my mum while I was back at the Highway Agency and that had a big impact on me.

“I took stock and decided that I would stop at nothing to build my own business.

“I’m so busy that I have to leave work on the desk.

“Customers who have previously found the garage through the website are now coming back with more work because I have provided them with a friendly and professional service, which is all drivers want.”

Andy will soon open a brand new unit with a dedicated MOT bay and more room to operate.

“I’ll never have to ignore jobs when we open the new garage because I’ll have two other technicians on board and a receptionist responsible for quoting on work through WCFMC.

“It’s my life’s work coming together and it means the world to me.

“This is what I am truly passionate about and opening the new garage is something I have wanted to do my entire life.

“I have been able to get there faster than I thought and there is no doubt that WCFMC has played a big part in that.”

To find out more about joining WCFMC, follow the ‘more details’ link below.