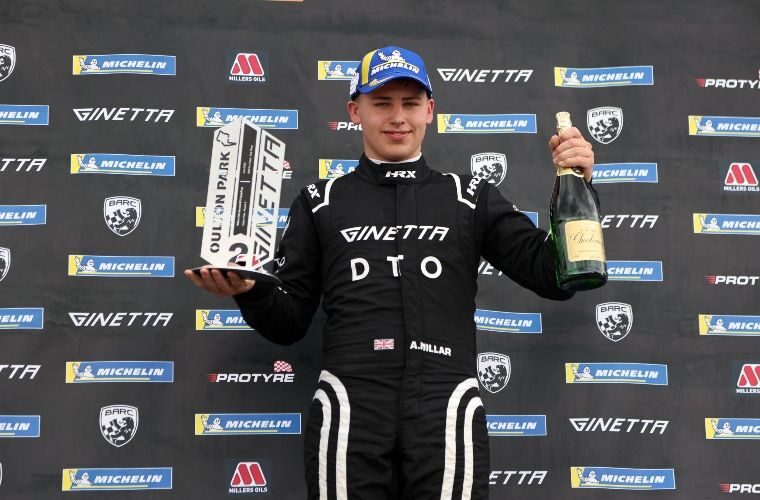 Reigning Ginetta Junior champion Aston Millar has made a strong start to life in the 2022 Ginette GT4 SuperCup championship, despite going up against more experienced counterparts.

Faced with a new car, new team and new Championship, 17-year-old has been quick to learn and has shown real promise for the season ahead.

“Going into the opening weekend I didn’t really know what to expect, as it’s a new car for me, and a brand-new championship for the car,” Aston explained.

“We’re delighted to have come away with podium finishes in every race so far and I am sure wins are just around the corner.”

At the season opener at Brands Hatch, Aston started Race 1 well and, while getting his first real feel for the car, he made his way through the field to battle it out with Dawes and Somerfield, bringing back a P3 finish.

Race 2 brought a close race for P2, once again up against Dawes and Somerfield, but Aston’s skill saw him secure the position.

Rain arrived by Race 3, bringing yet another new challenge for Aston and a reverse grid put his start at P5.

Confidence levels grew by lap three as he adapted to the new conditions and honed in on P3 where he battled for P2 with Rattican until a red flag ended the race.

Onto Oulton Park, in which Aston made a fast start to Race 4, battling near the front of the field throughout the race, eventually securing a P2 finish.

An action-packed televised Race 5, saw Aston make another impressive start, catapulting himself into the lead off the line.

Following a red flag, Aston continued to lead until a clever move from Somerfield netted him top spot.

The round finished in dramatic fashion, with Somerfield and Rattican making contact on the final corner, causing Millar to go off line in avoidance, but still able to claim another P2 finish.

“With his talent and early success, there’s no doubt that there’s lots more exciting things to come from Aston and we’re proud to be associated with him.”