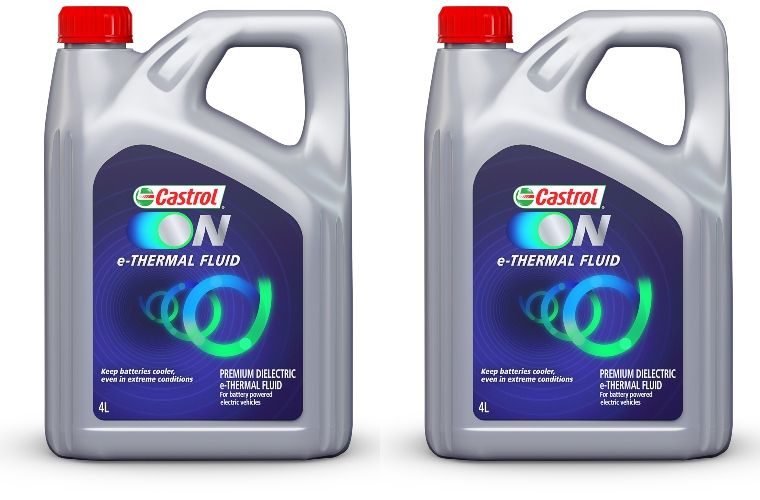 Castrol has launched an advanced new ‘direct’ battery e-thermal fluid that will enable future generations of EVs to be charged more rapidly and offer increased performance, protection, and sustainability.

Almost all of today’s EVs feature batteries using water / glycol-based coolants contained within a ‘jacket’ that surrounds the battery module.

In line with technology demands of the future, the new Castrol ON e-thermal fluid is an innovative dielectric fluid formulated specifically for ‘direct’ cooling, where the fluid circulates within the module and in direct contact with individual battery cells.

The result is a significant improvement in thermal management in all operating conditions, at high and low ambient temperatures, for a longer battery life.

The use of Castrol ON e-thermal fluid allows EV batteries to be charged more rapidly.

For example, when compared against existing water / glycol fluids in an independently conducted modelling study with the same variables, Castrol ON e-thermal fluid allowed for 41% faster charging.

In addition, during discharge the cells remain at their optimum operating temperature maximising efficiency and performance.

In independent tests, during discharge the Castrol ON e-thermal fluid reduced peak cell temperatures by 28°C compared to test water / glycol coolant, and by 11°C compared to an existing dielectric fluid4.

The new Castrol ON e-thermal fluid also ensures potential technical problems within the battery module can be better managed.

For example, overcharging or short-circuiting in an EV powertrain can lead to ‘thermal runaway’, where high temperatures cause irreversible failure to individual battery cells.

Thermal runaway can also lead to thermal propagation, where heat from the damaged cell is transferred via convection and conduction to adjacent cells.

This process can ultimately result in the catastrophic failure of the entire battery module.

However, with the Castrol ON e-thermal fluid, temperature spikes within individual cells are less likely, and if they occur they can be quenched at source – unlike coolants used in indirect cooled systems.

A further benefit of the new Castrol product comes from how it behaves within an EV’s coolant circulatory system.

It is of a lower viscosity than existing dielectric transformer oils and so delivers reduced pumping losses, optimising the efficiency and effectiveness of the temperature management process.

The increased power density that can be enabled through the application of direct battery cooling will allow manufacturers to develop EVs with even greater performance and much improved fast-charging capabilities.

“While direct e-thermal fluids currently only feature in high-profile hybrid and battery-EV (BEV) hypercars, we expect the technology to ‘trickle down’ and be widely adopted in future generations of volume-selling EVs.”