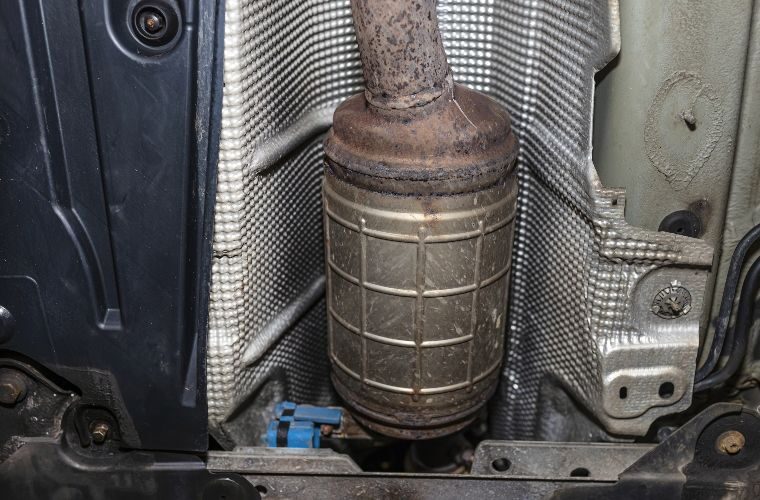 Last week I was contacted by one of our distributors and asked if I could try and appease one of their customers.

He was insisting that the DPF he had fitted to a Ford Transit in July 2021 was faulty because the DPF light was on – it was smoking heavily and was in limp mode.

I phoned the customer to get some more information as to why and how the DPF was replaced.

The customer explained that the DPF was replaced due to it being completely blocked.

A new EEC DPF had been fitted, the ECU was reset, and a forced regeneration was completed successfully.

The garage diagnosed that the new DPF was faulty. I arranged a site visit to the garage along with our distributor so that I could evaluate the situation at first hand.

On my arrival the mechanic explained that the problem was the DPF as their diagnostic tool had reported DPF full, and smoke was being emitted from the exhaust tail pipe.

I started the engine and brought the temperature up to over 70°C. I connected my EEC DPF reset tool which reported a Turbo boost problem as well as blocked DPF.

I activated a forced regeneration of the DPF which failed. I highlighted that the blue smoke was burning engine oil due to an engine problem.Engine oil can enter the combustion chamber from several sources including:

If the fault is not found and rectified immediately the DOC will become contaminated with oil/carbon, which will prevent the regeneration process from performing normally.

I then pointed to a large black oily deposit on the ground directly beneath the exhaust tail pipe, at this stage the mechanic came to the same conclusion, that the problem was not the DPF.

I explained that once the engine repair had been completed, before another new DPF is fitted, all the components needed for the regeneration process e.g., EGR value, fuel vaporiser, turbo, fuel injectors glow plugs MAP sensor etc must be checked to ensure they are free of carbon and working correctly.

It is important to follow this process as the components may have been contaminate by the engine failure.

Once this has been done, then fit the new DPF, reset the ECU and carry out a forced regeneration.

It is important to ensure that the DOC is clean, if it is heavily coated with carbon the regeneration process could fail resulting in a blocked DPF.

Wall-flow DPF’s usually remove >99.9 per cent of the soot within the exhaust gases.

A DPF filter core looks like a catalytic converter core that has had alternate channels plugged.

These plugs force the exhaust gas flow through the wall, and the particulate collects on the inlet face.

The DOC (Diesel Oxidation Catalyst) is a catalytic converter which is a flow-through device.

In addition to collecting the particulate, a method must exist to clean the filter.

Through engine modifications the engine is set to run a specific way.

When the filter load reaches a pre-determined level (about 40 per cent full) the ECU activates the regeneration process which will inject up to eight times the amount of fuel per stroke, this will increase the temperature within the DPF to over 550 degrees – this is known as “filter regeneration”.

Vehicles equipped with a PSA derived engine including Peugeot, Citroen, Ford, Volvo, BMW Mini and Mazda use a slightly different system, they have an additional tank usually located in the boot which injects a chemical called Eolys into the diesel, this reduces the incineration temperature of the PM within the DPF to 450°C.

Here at EEC we offer ProGen-R8, a cost effective solution covering all Eolys generations available in one litre and three litre sizes along with a refill kit.

If the DPF light is illuminated, the DPF will need to be regenerated (see manufacturers handbook) it explains that you will need to drive the vehicle following an advised procedure; quite often this is for 20 – 25 minutes at over 2500 RPM, meaning that a motorway or long dual carriageway drive is ideal.

If the engine management light comes on and the glow plug light flashes then you will not be able to regenerate the DPF by driving; in these instances, further intervention may be required.

Limp home mode may engage – limiting power and usually engine speed to a maximum of 3000rpm.

If DPF does not regenerate due to engine related faults or inappropriate drive cycle, and fills to over 90 per cent, the DPF will likely need replacing.

This is not covered under warranty.

The ECU must be re-adapted/reset followed by a forced regeneration when a new DPF is fitted.

This important step is to ensure that the ECU knows that the DPF and all related sensors are reset and ensure the system functions correctly prior to leaving the workshop.

DPF will not regenerate if:

It is possible to carry out a forced DPF regeneration by using the correct diagnostic machine; depending on the vehicle this operation could be static or dynamic.

EEC 6in1 will assist in regeneration and keep all component carbon free.