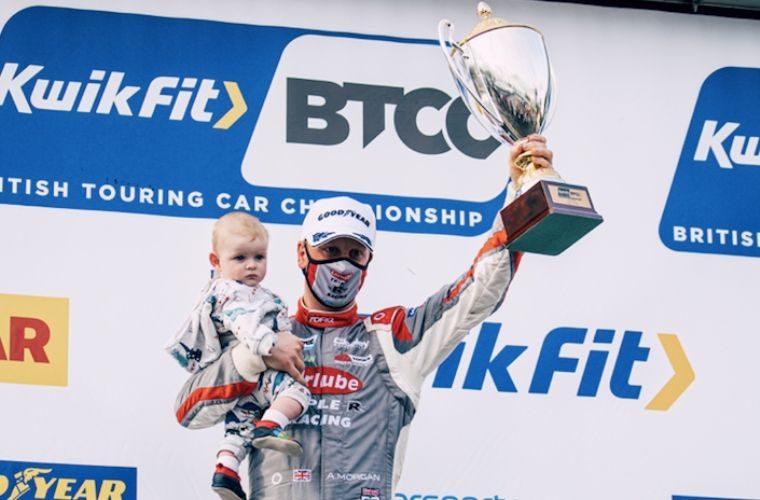 The Morganator led from start to finish in his Ciceley Motorsport-run Mercedes-Benz A-Class, starting second on the semi-reversed grid and jumping ahead of pole-sitter Bobby Thompson (Audi S3) on the run to the first corner.

Once ahead, Adam had to fend off the challenge of former team-mate Tom Oliphant (Team BMW). Oliphant crawled all over him for the first seven laps.

Unable to find a way past the Ribchester Rocket, Oliphant allowed team-mate Colin Turkington to move ahead and attack the Mercedes, but he couldn’t find a way past Adam either.

As Morgan headed a four-car train, joined by 2017 champion Ash Sutton (Infiniti Q50), an accident at the rear of the field triggered a race stoppage and confirmation of Adam’s first win since Rockingham in 2018 and first podium result of 2020.

Said Adam: “I just felt in the zone from the moment I put my helmet on. I felt really confident and made the best start I’ve ever made.

“It was tough keeping Tom behind me but it is a difficult track to overtake at and so it was a case of holding the BMWs up at places at which they were stronger, and backing them up when I could.

“Could I have kept them behind for another four laps?

“Who knows but I’m overjoyed with that win.

“Once I saw Tom had let Colin through, I realised that Colin would go for championship points so I didn’t have to defend quite as doggedly and he would be cautious.

“That was in my mind, but rear-wheel drive cars are good and as my tyres went off, he became more of a threat.”

It was an emotional Adam who spoke live to ITV post-race.

Later, he explained: “It seems like a long time since the last win and last year was very tough.

“To win in British Touring Cars is special.

“Last year was a long year and we are back where we belong and to have Freddie, my six-month old son here, is very special indeed.

“I was very emotional on the in-lap, and that is not like me at all.

“It is a reflection of the hard work everyone has put in and this I hope is the first of many wins this year.”

Chief engineer Steve Farrell remarked: “We made the car better for race three on a set up that reflected what we ran in qualifying as that was our only dry running of the day, but that is a massive boost to his confidence and to us a team.

“We still have more tweaks to make on the car but the weekend that we’ve had at a track, at which traditionally the Carlube Triple R Racing Mac Tools Mercedes doesn’t have the best of luck, is really good and we are all delighted.”

Earlier in the day, Adam had started the opening wet race from ninth on the grid, but made a small mistake at the first corner and dropped a couple of places.

A frantic battle with Tom Ingram (Toyota Corolla) almost spelt disaster at Druids on lap eight when the two touched, Adam having a lurid slide that he was luck to control.

He took eighth but was promoted to seventh after race winner Josh Cook (Honda Civic) was excluded for a technical infringement.

The Ciceley Motorsport squad made changes to the car for race two but didn’t have the optimum set-up as the conditions were still changeable.

Adam started seventh on the grid, and had a long battle with Oliphant over the opening laps until the BMW finally wriggled by. Adam battled home in ninth place, again scoring valuable points.

“We made significant changes to the car for race two,” said Adam.

“Some worked and some didn’t, so as the track dried the car wasn’t quite as good, but that was down to the road starting wet and drying out.

“However, a seventh and a ninth in the first two races was a good points haul so I am pleased with the day we’ve had.”

Jack took a 16th place as his best finish of the weekend as he continued his impressive maiden season in the BTCC.

The next races in the Kwik Fit British Touring Car Championship are in just a week’s time at Knockhill, Scotland, on August 29/30.

Qualifying is live on itv.com on Saturday August 29th with all the raceday action live on ITV2 on Sunday August 30th.