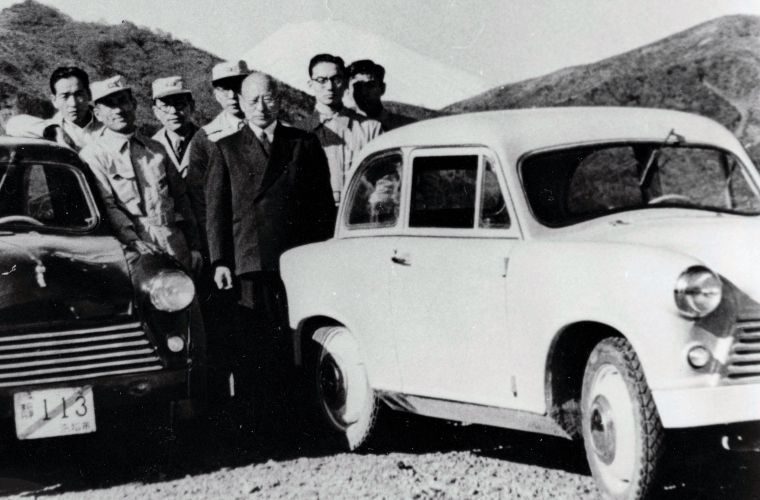 Michio Suzuki and his development team for the Suzulight in 1954.

Suzuki is this year celebrating its 100th anniversary after Michio Suzuki started out in business with the manufacture of textile looms in March 1920.

The loom became more advanced over the years through to the early 1950’s when a global decline in the cotton industry hit.

Initial development of Suzuki’s first car began as far back as 1937 but was shelved later with the outbreak of the second World War.

Research and development finally resumed in 1954 when Suzuki Motor Co Limited was formed.

Suzuki’s first car, known as the Suzulight, was a compact vehicle weighing just over 500kg and powered by a 360cc, 15PS two cylinder, two-stroke engine and the first of its type to ever be fitted to a car.

It was also the first car in Japan to feature a front wheel drive/front engine layout.

As a prototype, its most memorable early drive was a 300km trip across the Hakone mountainous region between Hamamatsu and Tokyo proved challenging on roads that had not yet been paved.

Although arriving very late in the evening, the team arrived to present the car to the President of ‘Yanase Auto’ Japan’s leading authority on Automobiles.

The President had stayed on late to greet the team and made his way out to thoroughly test the car.

It was way ahead of its time with independent coil spring suspension and rack and pinion steering.

Production commenced in October 1955 with initial production of three to four cars per month but by early 1956 monthly volume had climbed to 30 units.

In 1959, design changed with the development of the Suzulight TL model and popularity of Suzuki cars quickly grew.

The TL also adopted the front wheel drive/front engine layout and gained high acclaim thanks to its superior interior and storage space within its very compact size.

The engine remained as a two-stroke, air cooled 360cc unit but with an increase in power to 21PS at 5,500rpm.

Suzuki experienced a rapid rise in production of mini vehicles thanks to the TL.

In December 1959, just three months after its launch it had already reached the monthly production goal of 200 units which climbed very sharply in FY 1960 to a total of 5,824 units.

65 years since delivery of its first car, Suzuki remains globally renowned for its small cars and produces three million units a year.