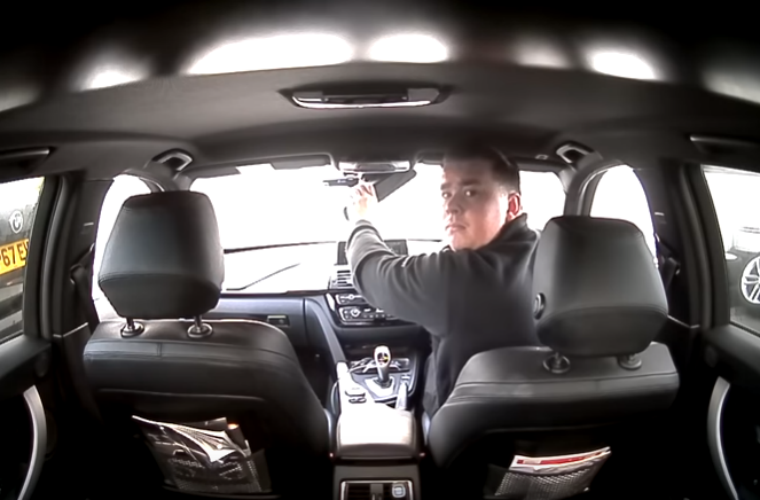 The moment the BMW technician spotted the second dashcam.

Video footage of a BMW main dealer technician attempting to disconnect a front-facing dashcam from a customer’s car has emerged online.

The technician can be seen fiddling with the dashcam before what’s likely to be a routine test drive.

However, while adjusting the rear-view mirror to gain better access to the camera he spots a second, interior-facing camera in the corner of his eye and double takes before realising his every move is being recorded.

He abandons efforts to disconnect the front-facing camera, repositions the camera and casually reverses the car off the forecourt.

Posting the video online, the owner of the car said: “Continuous attempts to disconnect my dashcam when it was in for a service, but gives up when he notices I have a rear camera facing the cabin.”

It follows numerous cases of owners mistaking a routine test drive for a joyride and posting the dashcam footage online following servicing and maintenance work at a garage.

Writing previously on the subject of dashcams in the GW forum, Nick Seabrook of Palmers Garage Exmouth said: “Public perceptions worry me.

“You hear a lot in the media about people being recorded, named and shamed but I think a lack of understanding could misrepresent the garage in the wrong way.

“You may have a good reason why the vehicle is being driven a certain way, but the customer may not understand this.

“You might be looking in the glovebox, door pockets and boot for the locking wheel nut key, which on dashcam could look highly suspicious and be easily misinterpreted.”

Dashcams can take many forms and are available for as little as £20, boasting the ability to record vision, sound and even GPS tracking.

Higher-end models tend to feature more than one lens, capturing the road ahead, behind and inside the cabin.

Where do you stand with dashcam filming in your garage? We’re interested to hear your experiences of dashcams in the workshop – share your comments below.